Friends of a Friend

The Friend of a Friend (FOAF) project is creating a Web of machine-readable pages describing people, the links between them and the things they create and do. The FOAF project began early in 2000 as an experimental linked information project, created by Dan Brickley and Libby Miller.

The primary technical documentation for the core FOAF vocabulary is the FOAF specification. The FOAF Wiki and documentation webpages provide more informations about the project. 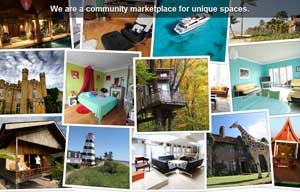 Airbnb connects people who have space to spare with those who are looking for a place to stay. Guests can build real connections with their hosts, gain access to distinctive spaces, and immerse themselves in the culture of their destinations. Whether it’s an urban apartment or countryside castle, Airbnb makes it effortless to showcase your space to an audience of millions, and to find the right space at any price point, anywhere.

A Twitgoo application for the Chumby has been developped by Andrew Howie (howdog) from Sydney.

Another Chumby app based on Twitter is Twistori, a first step in an ongoing social experiment, inspired by wefeelfine, hand-crafted by Amy Hoy and Thomas Fuchs.

Chumby is a content platform that serves flash-based apps across mutiple devices. Current chumby devices include :

The Chumby Dashboard allows to create channels and to add apps to the channels. The display time per app can be customized (from a few seconds to a few minutes or forever). The channels can be selected on the Chumby device and the apps are shown sequentially.

The following virtual Chumby shows the channel marco from my Chumby account.

On june 28, 2011, Google rolled out a new social networking service called Google+. Right now, Google+ is in limited field trial to test with a small number of people, but it won’t be long before the Google+ project is ready for everyone.

Basically, Google+ is an amalgamation of the following services :

Further informations are available at the following links :

Piwik, an open source alternative to Google Analytics, is a downloadable, open source (GPL licensed) real time web analytics software program. It provides you with detailed reports on your website visitors: the search engines and keywords they used, the language they speak, your popular pages, …

Piwik is a PHP MySQL program that is installed your own webserver. At the end of a five minute installation process, a JavaScript code is generated that you embed in the webpages you want to track.

Today Google, Bing and Yahoo announced a common initiative to create and support a common vocabulary for structured data markup on web pages.

A documentation about the schemas and data types is available at the schema.org website.

The Facebook URL linter is a tool that helps you to debug Open Graph webpages, pages with embedded like button or with other social plugins.

It’s even possible to see how many URL’s of pages that are not part of the Facebook Open Graph have been shared by using the API request :

More details are provided by the API request

Insights provides analytics on a Facebook Page, app and website. The Insights Dashboard makes it easy to see how Facebook users are interacting with your content, and the Insights APIs allow developers to obtain additional statistics and integrate the data with third party reporting systems.

Last update : June 29, 2013
PageRank is a link analysis algorithm, named after Larry Page and used by the Google Internet search engine, that assigns a numerical weighting to each element of a hyperlinked set of documents. PageRank has been patented; the patent is assigned to Stanford University and exclusively licensed to Google.

The PageRank of a website is shown in the Google toolbar. The PageRank score was however removed by Google in October 2009 from the Webmaster Tools, because Google has been telling people for a long time that they shouldn’t focus on PageRank so much. PageRank is not an important metric for search engine optimisation.

Several providers continue to find the  PageRank data useful and offer free PageRank checkers, for instance at the website www.prchecker.info.

Search engines see content farms as a problem, as they tend to bring the user to less relevant and lower quality results of the search. On February 24th, 2011, Google announced that they were making a substantial change in their ranking algorithms to purge low-quality informations in the search results.

A black hat is the bad guy in a western movie. In computing slang it refers to a computer hacker. Black Hat search engine optimization is defined as techniques that are used to get higher search rankings in an unethical manner. Some of these techniques are keyword stuffing, invisible (hidden) text, cloaking, duplicate content and doorway pages.

Further informations about the Google search algorithms are available at the scriptol website.

Trackbacks were originally developed by SixApart, creators of the MovableType blog package. It’s a notification method between websites working as follows :

Most trackbacks send to Person A only a small portion (a teaser called an “excerpt”) of what Person B had to say. One problem is that there is no actual verification performed on the incoming trackback, and indeed they can even be faked.

Pingbacks were designed to solve some of the problems of trackbacks. The official pingback documentation is available on the website www.hixie.ch.

The best way to think about pingbacks is as remote comments:

A useful guide “Introduction to Blogging” with more details about trackbacks and pingbacks is published by WordPress.