Dance your PhD contest is an idea of the Gonzo Scientist, the alter ego of John Bohannon. John Bohannon is a biologist, science journalist and dancer, based at Harvard University. He is the owner of the Gonzolabs and the protagonist of a regular column in Science magazine. He writes also for Discover Magazine and Wired Magazine.

The GonzoLabs are a virtual research institution where scientists play with art and artists play with science. The dance experiment began back in October 2008 with a challenge to scientists to interpret their Ph.D. theses in dance form, capture the dances on video, and upload them onto YouTube. Six weeks later, a panel of expert judges chose four winners, coming from Australia, Germany, Canada, and the United States. Each scientist was paired with a choreographer who studied in depth a peer-reviewed research article of the scientist. A few months later a four-part dance called THIS IS SCIENCE was performed in front of an audience in Chicago, Illinois, during the AAAS (American Association for the Advancement of Science) annual meeting.

Here are the results :

John Bohannon is also one of the creators of the Science Hall of Fame (see former post). 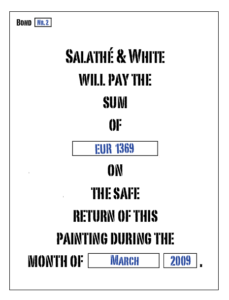 On the 17th of March 2008, I was the winner of the second collaborative bond painting (80cm x 60cm) that has been auctioned on ebay. The painting is a zero coupon bond created and signed by the swiss artist Marcel Salathé and the australian artist Anthony White. The artists guarantee to buy the painting back at a specific price, indicated on the painting, upon safe return during a specific month, also indicated on the painting. The summarized reasoning behind the Salathé & White bond paintings is that art is valued by the price someone is willing to pay, beauty is in the eye of the beholder and the longevity of an artwork is crucially depending on the first price paid. The complete manifesto is presented on the Salathé & White website.

Marcel Salathé alias Sala is the creator of onethousandpaintings.com, an art project that has considerable success since its conception in 2006. More than 780 paintings have been sold and the project was presented in numerous blogs and in many high impact media publications. 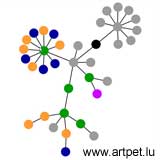 Sala is not only a famous artists, but also a biologist (with an ETH Medal for outstanding PhD thesis awarded 2007), a writer, a musician and a talented programmer. He is the author of the html-graph applet. Give it a try and see the tags in your webpage popping up like confetti.

Marcel Salathé’s reflections about the art market resulted in the following actions concerning his paintings :

On July 10th, 2008, Marcel Salathé was invited by  Google TechTalks to talk about the Onethousandpaintings artwork. The video published on the YouTube googletechtalks channel is shown herafter.

My daughter bought the Onethousandpainting Nr 658 mid 2006. It was the first painting sent to Luxembourg and one of the first work of conceptual art purchased by my daughter who owns a contemporary artgallery in Luxembourg. On August the 2nd, 2006, Luxembourg was welcomed as the24th country to the list of countries where paintings have been purchased on the blog of Marcel Salathé’s website.

Anthony White is best known for his “Money Series”, a project that he started using the Australian Dollar. The series has now been expanded to British Pounds, US Dollars and Euros, and over five hundred paintings have been sold to over twenty different countries in the past three years. On november 12th, 2007, I received my 130€ painting from the money series of Anthony White. It was the first painting that has been sent to Luxembourg. 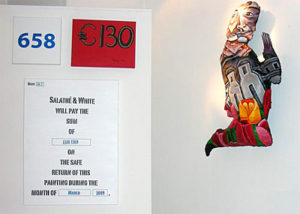