Referring to the post about Google STT, this post is related to Google speech synthesis with processing. Amnon Owed presented in November 2011 processing code snippets to make use of Google’s text-to-speech webservice. The idea was born in the processing forum.

The sketch makes use of the Minim library that comes with Processing. Minim is an audio library that uses the JavaSound API, a bit of Tritonus, and Javazoom’s MP3SPI to provide an easy to use audio library for people developing in the Processing environment. The author of Minim is Damien Di Fede (ddf), a creative coder and composer interested in interactive audio art and music games. In November 2009, Damien was joined by Anderson Mills who proposed and co-developed the UGen Framework for the library.

I use the Minim 2.1.0 beta version with this new UGen Framework. I installed the Minim library in the libraries folder in my sketchbook and deleted the integrated 2.0.2 version in the processing (2.0b8) folder modes/java/libraries.

Today I run succesful trials with the english, french and german Google TTS engine. I am impressed by the results.

Processing is an open source programming language and environment for people who want to create images, animations, and interactions.

Florian Schulz, Interaction Design Student at FH Potsdam, presented a year ago in the processing forum a speech to text (STT) library, based on the Google API. The source code is available at GitHub, a project page provides additional informations. The library is based on an article of Mike Pultz, named Accessing Google Speech API / Chrome 11, published in March 2011.

I installed the library in my processing environment (version 2.0b8) and run the test examples with success. I did some trials with the french and german Google speech recognition engines. I am impressed by the results.

Additional informations about this topic are provided in the following link list :

The new JavaScript Web Speech API specified by W3C makes it easy to add speech recognition to a web page and to create voice driven web applications. It enables developers to use scripting to generate text-to-speech output and to use speech recognition as an input for forms, continuous dictation and control. The JavaScript API allows web pages to control activation and timing and to handle results and alternatives.

A demo working in the Chrome browser 25 and later is available at the HTML5 rocks website.

There are two processes : Text-to-Speech (speech synthesis : TTS) and Speech-to-Text (speech recognition : ASR). There are at least three different approaches to synthesize text :

A HTML Speech XG Speech API Proposal, introduced by Microsoft to the  HTML Speech Incubator Group, is available as unofficial draft at the W3C website.

A list of speech recognition software is available at Wikipedia. The main hosted speech applications are presented below :

The applications must be configured to use the correct servers.To make the web/general key work, you need to buy credits. The low usage price is $0.02 per word (TTS) or per transaction (ASR).

An free iSpeech app for iOS devices (version 1.3.5 updated May 13, 2013) to convert text to speech with the best sounding voices is available at the iTune store. This app is powered by the iSpeech.org Text to Speech (TTS) software as a service (SaaS) API. Other apps for iOS and Android devices are listed at the iSpeech website. A Text-to-Speech demo is also available.

In joining NDEV Mobile, developers have free access to wrappers and widgets for simple application customization, all through a self-service website. Developers also have access to an on-line community forum for support, a variety of code samples and full documentation. Once an NDEV Mobile developer has integrated the SDK into their application, Nuance provides 90 days of free access to the cloud-based speech services to validate the power of speech recognition on their application. To put an application in production, a licence fee of 3.000 $ has to be prepaid.The low usage price is 0,009 $ per transaction.

The following platforms are supported :

A mobile assistant & voice app for iOS and Android is available in the iTunes at GooglePlay stores.

AT&T offers a free speech development program to access the tools needed to build, test, onboard and certify applications across a range of devices, OSes and platforms.

There are three classes of functionality in the AT&T speech API family :

The Speech API provides two methods for transcribing audio into text and one method for rendering text into audio. An AT&T Natural Voices Text-to-Speech Demo is availbale at the AT&T research website.

API access to the AT&T sandbox and production environments costs 99$ a year. The sandbox and production environments allow you to develop, test, and deploy applications using AT&T APIs, including 1 million points (one transaction = one point) each month to spend on any APIs they like. A US based credit card is required to charge 20$ for each additional group of 2,000 points exceeding one million. See the AT&T pricelist.

The Google Speech API can be accessed safely through a Chrome browser using x-webkit-speech. Some people have reverse engineered the Google speech API for other uses on the web. The interface is free, but it is not an official public API.

On February 23, 2013, Google announced at the Chrome Blog that the new stable Chrome release includes support for the Web Speech API, which developers can use to integrate speech recognition capabilities into their web apps in more than 30 languages. A web speech API demo is available at the Google website. In the Peanut Gallery, you can add intertitles to old black-and-white movies simply by talking to Chrome.

The following list provides links to more informations about the Google speech API’s :

More speech applications from other suppliers are listed hereafter :

VoicePHP is not an extension to PHP; infact it’s the same PHP which now outputs voice instead of text and also takes input as voice instead of text. In technical terms, it’s PHP whose standard text based input & output (stdio, stdout in programmer’s term) are replaced by voice equivalent. 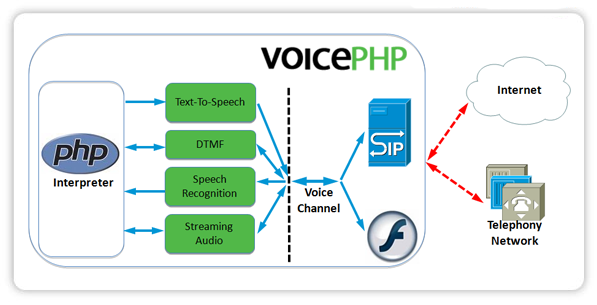 Sphinx-4 is a state-of-the-art speech recognition system written in Java. It was created via a joint collaboration between the Sphinx group at Carnegie Mellon University, Sun Microsystems Laboratories, Mitsubishi Electric Research Labs (MERL), and Hewlett Packard (HP), with contributions from the University of California at Santa Cruz (UCSC) and the Massachusetts Institute of Technology (MIT).

A number of tests and demos rely on having JSAPI installed. Sphinx-4 can be combined wit FreeTTS to set up a complete voice interface or a VoiceXML server.

Possible uses of FreeTTS are:

To write software with FreeTTS, it is recommended to use the Java Speech API (JSAPI) 1.0 to interface with FreeTTS. The JSAPI interface provides the best method of controlling and using FreeTTS.

Currently, the FreeTTS distribution comes with these 3 voices:

FreeTTS interfaces with the MBROLA synthesizer and can use MBROLA voices. It’s also possible to import voice data from Festival and FestVox or CMU ARCTIC voices.

A full implementation of Sun’s Java Speech API for Windows platforms, allowing a large range of SAPI4 and SAPI5 compliant Text-To-Speech and Speech-Recognition engines (in many different languages) to be programmed using the standard Java Speech API has been developped by CloudGarden. Packages and additional classes augment the capabilities of the JSAPI by, for example integrating with Sun’s JMF, allowing, amongst other things, MPEG audio files to be created and read, and compressed audio data to be transmitted across a network