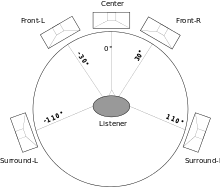 All 5.1 systems use the same speaker channels and configuration, having a front left (L) and right (R), a center channel (C), two surround channels (SL and SR) and a subwoofer (LFE).

Audio files for 5.1 systems are often encoded with the lossless FLAC codec. FLAC is an open format with royalty-free licensing and a reference implementation which is free software. FLAC has support for metadata tagging, album cover art, and fast seeking.

Lossy compression and encoding schemes for digital audio are MP3 and its successor AAC (Advanced Audio Coding). AAC has been standardized by ISO and IEC, as part of the MPEG-2 and MPEG-4 specifications. AAC is the standard audio format for YouTube, Apple (iPhone, iPod, iPad, …) and Sony devices (Playstation, Walkman, …). AAC is more advanced than the Dolby Digital AC3 codec.

Last update : August 25,2013
ID3 is a metadata container most often used in conjunction with the MP3 audio file format. It allows information such as the title, artist, album, track number, and other information about the file to be stored in the file itself.

There are two unrelated versions of ID3: ID3v1 and ID3v2. They are de facto standards, because no standardization body was involved in its creation nor has given it a formal approval status.

A tag editor is used to read or write ID3 metadata. Many media players, including the standard players iTunes and Windows Media Player, provide tagging features.

The most common fields displayed in a DLNA renderer are the following :

Sometimes the track number is also shown. Less usual are the Album Artist, the Composer or the Disc Number.

The ID3 standard is very flexible with regards to the type and number of images that can be embedded in a MP3 single file (21 types are specified : icons, leaflets, cover art, artist, composer, conductor, location, …). In practice only one picture is used and displayed by the player. More informations about embedding album art in MP3 files are available at the weblog of Richard Farrar.

Informations about metadata editors for image files are available in the following post.

Last update : June 16, 2012;
M3U is a file format to store multimedia playlists. It was first used by Winamp. PLS does the same, but is a more expressive format than basic M3U, as it can store  information on the song title and length (this is supported in extended M3U only). With PLS version 2, playlists also include a PLS version declaration.

Xiph.Org Foundation, a non-profit organization that produces free multimedia formats and software tools, created in 2004 the XML Shareable Playlist Format (XSPF, called spiff) for sharing the kind of playlist that can be played on every personal computer or portable device. The home of XSPF is the website xspf.org.

XSPF is supported by the DLNA server Seviio. The playlists handle not only audio, but also video or other multimedia files.