Last update : June 1, 2013
At recent robotic and toy fairs (Japan 2012, Innorobo 2013, Toyfair 2013, …) several machines were presented that are basically mobile phones on a robotic trolley. The most advanced robots of this type are presented below :

The main Android’s buttons are :

A running app is minimized by tapping the Home icon. A recently used app is revealed by tapping the Recent icon. To see more recent apps, slide down. To switch to an app, tap a screenshot from the Recent apps list. To clear a recent app from the list, swipe it sideways. You don’t need to close a running app for every instance on the Android system. If you want however to stop an app, run the Settings app, tap Applications under DEVICE, select the app you want to close, tap the Force stop button and tap OK to confirm. At  the same settings you can uninstall the app. To rearrange icons on the screen, touch and hold any icon for a second and drag the icon to a different spot on the screen. You can also drag an icon to the left or right edge of the screen until it starts sliding to drop the icon to another screen.  To remove an icon, touch and hold it until the Remove icon appears on the top, the drag and drop the icon over the Remove icon.

To group similar apps together, you can create a folder by holding an icon for a second to reveal a create folder button at the top of the screen. Give it a name and drag the wanted icons into this folder. You can rename a folder at any time by tapping its name to rename. To turn off Auto-Correction, open the app Settings and select Language & input under PERSONAL and enter the keyboard tab to change the options.

The following list provides links to additional informations about this topic : 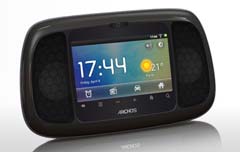 ARCHOS continue to push technological boundaries and innovation with two new Android devices designed for the home – The ARCHOS 35 Home Connect, an Android-based web radio and the ARCHOS 35 Smart Home Phone, an Android DECT phone. Both are smart devices and feature all of the Android functionalities.

The ARCHOS 35 Home Connect is the perfect music box and the best portable Android device for streaming radio and music anywhere at home with an amazing sound quality.

Both cutting-edge ARCHOS Android-based home devices, thanks to the front facing webcams, bring new usages such as video calling, baby monitoring and even room surveillance.