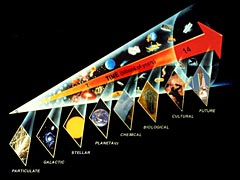 Last update : July 17, 2013
Big History is a field of historical study that examines history on large scales across long time frames through a multidisciplinary approach, to understand the integrated history of the cosmos, earth, life, and humanity, using the best available empirical evidence and scholarly methods. Big History evolved from interdisciplinary studies in the mid-20th century, some of the first efforts were Cosmic Evolution at the Center for Astrophysics, Harvard University and Universal History in the Soviet Union.

An International Big History Association (IBHA) was founded in 2010. The same year, Walter Alvarez and Roland Saekow from the department of Earth and Planetary Science at the University of California, Berkeley, developed ChronoZoom, an online program that visualizes time on the broadest possible scale from the Big Bang to the present day. A beta version of ChromoZoom 2 in HTML5 was released in March 2012 by Outercurve Foundation, a non-profit organization that supports open-source software.

In 2011, Bill Gates and David Christian started The Big History Project to enable the global teaching of big history. Seven schools have been selected for the initial classroom pilot phase of the project. IBHA is one of the partners of the project. Educators can register to participate in the beta program of the Big History Project. At the TED talks in March 2011, David Christian narrated a complete history of the universe, from the Big Bang to the Internet, in a riveting 18 minutes.