Flashdevelop has no integrated CVS or SVN file management. To do this is a huge task. The core FlashDevelop team can not start such a project and suggest to use Tortoise.

TortoiseSVN is a Subversion (SVN) client, implemented as a windows shell extension. It’s intuitive and easy to use, since it doesn’t require the Subversion command line client to run. The  version 1.6.7.  was released on january 23, 2010, the most recent version is 1.6.9 released on june 21, 2010. 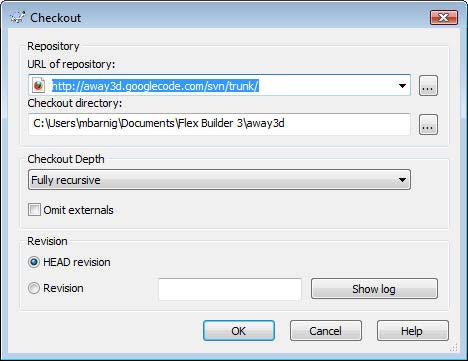 CVS (Concurrent Versioning System) is a free software revision control system in the field of software development. Version control system software keeps track of all work and all changes in a set of files, and allows several developers to collaborate. Dick Grune developed CVS in the 1980s.

CVS became popular in the open source software world and is released under the GNU General Public License. In the early 2000s, many users of CVS began to replace it with Subversion (SVN), which was explicitly designed to circumvent some of the limitations of CVS. As of January 2009, many open source projects have replaced Subversion or CVS with a distributed version control system, such as Git or Mercurial.

Subversion, as an open source version control system, will become a project of the Apache Software Foundation and remains of interest for a lot of projects.

Trunk, Tags and Branches are names of directories commonly used in revision control systems, but there exist no agreed definition. I have the following understanding:

A discussion about this topic can be viewed at the stackoverflow website, more detailed informations are available in the conference paper Streamed Lines: Branching Patterns for Parallel Software Development.