MikuMikuDance (MMD) is a freeware animation program that lets users animate and create 3D animation movies for Vocaloid models. MikuMikuDance was programmed by Yu Higuchi and has gone through significant upgrades since its creation. Its production was made as part of the Vocaloid Promotion Video Project (VPVP).

The software allows users to import 3D models into a virtual space that can be moved and animated accordingly. The following features are available : 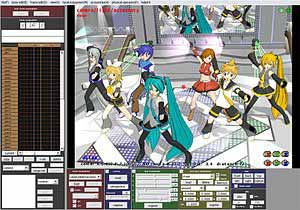 The software comes with a number of 3D models based on the mascots of Crypton Future Media Vocaloids. The default models Miku, Meiko, Kaito, Kagamine Rin/Len, Akita Neru and Haku Yowane were created by Animasa, the default Sakine Meiko model was created by Kio. All content, including the 3D models, is distributed freely by the users and most of its additional content is produced by fans using 3D modeling software. As recognition and popularity of Vocaloids grew, the japanese video hosting platform Nico Nico Douga became a place for collaborate content creation.

The first version of Miku Miku Dance was released on February, 24, 2008.  An english version was released one month later. On May 26, 2011, Yu Higuchi announced he would retire from developing MMD. The last stable release of the program is version 7.30.

Additional useful informations about Miku Miku Dance are available at the following links :