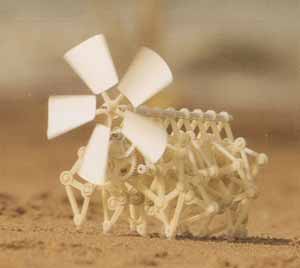 Theo Jansen, born 14 March 1948, is a Dutch artist and kinetic sculptor. Since 1990 he builds large works, called strandbeests, which resemble skeletons of animals, that are able to walk using wind power on the beaches of the Netherlands. Not pollen or seeds but plastic yellow tubes are used as the basic material of this new creatures. Eventually he wants to put these animals out in herds on the beaches, so they will live their own lives.

Some beach animals  have a stomach consisting of recycled plastic bottles containing air, that can be pumped up to a high pressure by the wind.  Others are able to detect once they have entered water and walk away from it, and one species will even anchor itself to the earth if it senses a storm approaching.

The artworks of Theo Jansen have been presented on numerous websites, TV shows, videos, books, conferences and exhibitions. The movie Strandbeesten, directed by Alexander Schlichter (2008), was presented at the Bio:Fiction festival in 2011.

An assembly kit of a miniature version of the strandbeests Animaris Ordis Parvus is available at the website of the artist. It is produced by Gakken Education Publishing Co. Ltd. Japan.  After assembling, the mini strandbeest walks on the wind, by hand or by blowing against the propeller. Another strandbeest, the mini Rhinocerus, has been published by the same company in Japan. 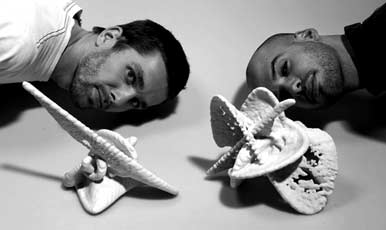 ~IDENTITÄT – The »Gestalt« of dig­ital identity

A recent project in this area has been done by Jonas Loh and Steffen Fiedler as a bachelor thesis at the Studiengang Interfacedesign of the University of Applied Sciences Potsdam, Germany, with the help of the 3D Lab of the TU-Berlin. The project called ~IDENTITÄT – The »Gestalt« of dig­ital identity eval­uates how dig­ital identity is generated to determine pa­ram­e­ters on which a compa­ra­ble anal­yses of the dig­ital identity is pos­sible. The concept, the process and the results are published at the website www.digital-identities.com. Photos of the whole project are available at the flickr collection. The project was tutored by Prof. Boris Müller.

Other 3D sculpture projects are :