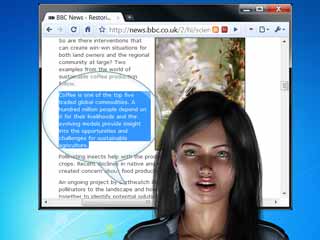 A AIML beginners guide is available at the website of the ALICE  A.I. Foundation.

There are various AIML sets available, among them the free Annotated ALICE AIML set, a revised release of the scripts comprising the award winning chat robot ALICE. The ALICE A. I. Foundation is also offering the commercial version Superbot 2.1 (999 US$) that helps you to create a totally unique custom bot personality for your web site or application.

The other free softwares available are implementations of the ALICE chatbot engine in different computer languages, tools and knowledge bases. Documentation, specifications, tutorials and showcases are available at the alicebot.org website. Chatting with an original ALICEBOT is possible in the Hall of Fame of Digital Art at Leslie’s Artgallery.

Another more advanced implementation of an AIML robot is Denise, a virtual assistant software created by Guile 3D Studio.

An outstanding tool to program a robot brain in AIML is the free GaitoBot AIML editor provided by the german company Springwald Software.

Guile 3D Studio, a company founded in 2001 by System Analyst, Artificial Intelligence Specialist and 3D Graphic Artist Guile Lindroth, created the advanced Virtual Assistant Denise. She comes with a real-time proprietary graphic engine, a high quality English Text to speech voice and a Voice Recognition engine. Denise works with an adaptive Artificial Intelligence Brain, based on AIML, that can learn by itself and be customized by user.

In september 2011, Guile 3D teamed up with NeuroSky for a brainwave impulse control interface. The NeuroSky MindWave headset is the first product available for the consumer market. As a turnkey brainwave sensing headset, it uses the same bio-sensor as the Mattel MindFlex, Star Wars Force Trainer and NeuroSky’s research tool the MindSet. It measures brainwave impulses from the forehead from a position neuroscientists call FP1 with research grade precision.

In the same month, Guile 3D teamed up with EMOTIV for computer-brain control interface. Based on the latest developments in neuro-technology, Emotiv has developed a revolutionary new personal interface for human computer interaction.

In 2013 an Avatar Builder SDK was announced which was however never released up to now. In January 2014, Guile 3D Studio became NextOS. The company will now focus in the Home Automation area as well improve the Virtual Assistant Technology. In April 2014 NextOS stopped for a while the work on the desktop version Denise 2.0 to get the Home Automation and the mobile modules ready. Late May 2014, NextOS started an Alpha testing phase for Virtual Denise Mobile on iOS, Android and Windows Phone 8 platforms. For this purpose NextOS uses both TestFlight, a free platform to distribute beta and internal iOS applications to team members and .