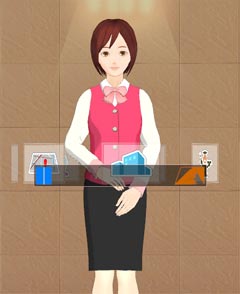 Vocaloid is a singing synthesizer application, with its signal processing part (concatenative synthesis) developed through a joint research project between the Pompeu Fabra University in Spain and Japan’s Yamaha Corporation, who developed the software into a commercial product. Vocaloid enables users to synthesize singing by typing in lyrics and melody. The main parts of the Vocaloid  system are the Score Editor, the Singer Library and the Synthesis Engine. The project started in 2000, the first commercial Vocaloid version was presented by Yamaha at the Musikmesse in Germany in 2003 and the Vocaloid version 3 was launched in October 2011.

Each Vocaloid is sold as “a singer in a box” designed to act as a replacement for an actual singer. Today seven studios are involved with the production and distribution of Vocaloids, among them are three studios creating english Vocaloids, the other four are solely creating Japanese Vocaloids.

A complete list of the Vocaloid products is available at the Wiki website.  The marketing of  the Vocaloids is done by the studios.

Just like any music synthesizer, the software is treated as a musical instrument and the vocals as sound, belonging to the software user. The mascots for the software can be used to create vocals for commercial or non-commercial use as long as the vocals do not offend public policy. On the other hand, copyrights to the mascot image and name belong to their respective studios and can not be usedd without the consent of the studio who owns them.

There are a number of derivative products, for example Vocaloid-Flex, Vocal Listener, Miku Miku Dance, Project Diva and MMDAgent. An online Vocaloid service (NetVocaloid)  in English and Japanese is available at the Y2 Project website.

The following virtual vocalists are the most famous :

A number of figurines and plush dolls were released for some of these singers, some have their own Twitter, Facebook and MySpace accounts.

In Japan, Vocaloids have a great cultural impact and lead to a lot of legal implications. Vocaloid music is available on CD’s, iTunes, AmazonMP3 etc. Open air concerts with virtual vocalists have been organized recently with great success :

During the concerts, 3D animations of the Vocaloid mascots are projected on a transparent screen giving an effect of  a pseudo-hologram. Videos of different Vocaloid concerts are available at the following Youtube playlist.

A similar software as Vocaloids, developped by Ameya/Ayame, is called UTAU and has been released as freeware. Cracked copies of Vocaloids are called Pocaloids.