This topic refers to my recent post about iOS Development and provides more detailed informations about iOS Xcode 6.3 projects. An Xcode project is the source for an iOS app; it’s the entire collecton of files and settings needed to construct the app. An iOS app is based on event-driven programming.

To create a new project in Xcode, the menu File -> New -> Project leads to a dialog window to chose a project template.

The Single View Application in the iOS templates is a good starting point to create a simple app, for example the classic HelloWorld demo.

The name of the app (HelloWorld) is entered as Product Name. Spaces are legal in an app name, we could also name the project Hello World. Other punctuations in the product name can however lead to problems. The product name is used by Xcode to fill in the blank in several places, including some filenames.

Clicking the next button shows a file selection window where you can select or create a location (an Xcode workspace folder) and place the project under version control in a Git repository, which is however design overkill for a small tutorial project.  Clicking the create button generates the skeleton of a simple app, with precompiled files and settings, based on the selected template. If you have not yet an Apple Development Account, a warning message says “no signing identity found”.

The different files and parameters of an Xcode project can be classified as :

This is a lot of embodied information that is presented in the Xcode IDE Project Window in graphical form. This window can be configured in the following parts to let you access, edit and navigate your code and to get reports about the progress of building and debugging an app : 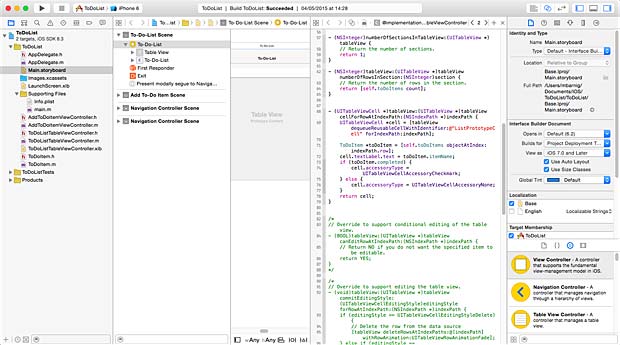 A project widow is powerful and elaborate. The different panes and subviews can be shown or hidden inside the View Menu with the corresponding submenus. The width and height of the panes can be changed by dragging the edges. Keyboard shortcuts can be associated to panes to show, hide or switch them easily. Usually all these parts are not displayed at the same time, except very briefly in rather an extreme manner. By control-clicking a area in the Xcode project window, a shortcut menu appears to select help articles.

The toolbar features the following parts :

At the bottom of the navigator pane is a filter which lets you limit what files are shown. Below the search filed is the current search scope.

The utilities pane at right-hand contains inspectors in the top half that provide information about the current selection or its settings; in some cases, these inspectors let you change those settings. There are four main cases : 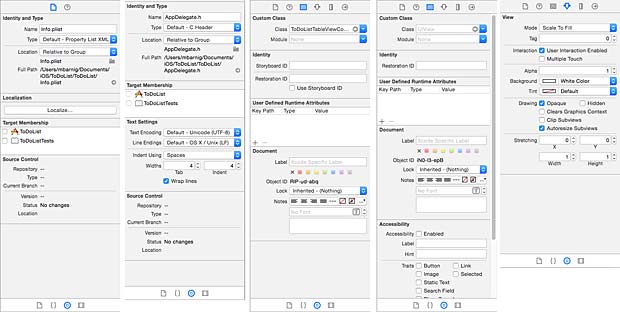 In the bottom half the utilities pane contains four libraries that function as a source of objects you may need while editing your project :

You can toggle between these four libraries. The object library is the most important. Press spacebar to see help pop-ups describing a library item. 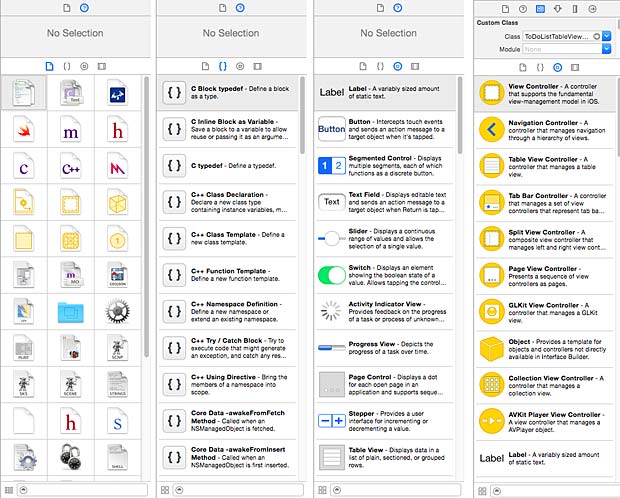 The editor provides its own form of navigation, the jump bar across the top which show you hierarchically what file is currently being edited. The jump bar allows you to switch to a different file and it displays also a pop-up menu, which has also a filter field.

To edit more than one file simultaneously, or to obtain multiple views of a single file, you can split the editor window using assistants, tabs and secondary windows. The menus View -> Navigators and File -> Tab or File -> Window allow to activate the splitting. You can determine how assistant panes are to be arranged with the Menu View -> Assistant Editor submenu. The assistant pane bears a special relationship to the primary editor pane (tracking). 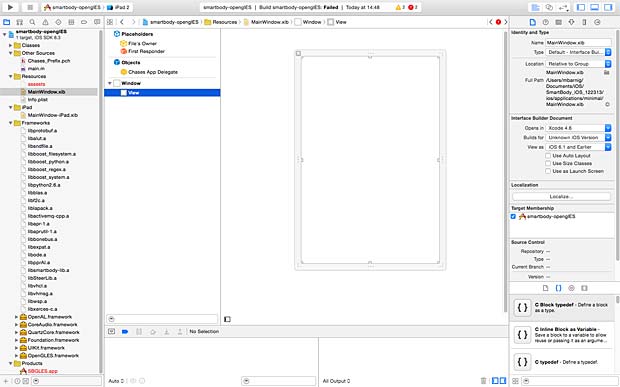 The debug navigator displays the call stacks of a paused app. You can debug Swift or C-based code as well as OpenGL frames. The debug navigator opens automatically whenever you pause your application (by choosing menu Debug -> Pause), or if it hits a breakpoint.

The debug navigator shows threads with the following icons :

Anatomy of an Xcode Project

The first item in the Project Navigator represents the project itself. The most important file (archive, folder) in the project folder is HelloWorld.xcodeproj.  All the Xcode knowledge about the project is stored in this file.

Based on the iOS SDK 8.3, a project HelloWorld has two targets :
HelloWorld and HelloWorldTests.
A target is a collection of parts along with rules and settings for how to build a product from them. The test target is a special executable whose purpose is to test the app’s code.

The LaunchScreen.xib file is not necessary and can be deleted if a launch screen picture is included in the asset catalog.

The two products which will be created in the project are HelloWorld.app and HelloWorldTests.xctest.

The project and targets are specified by the following parameter sets :

You can add more targets to a project, for example a custom framework to factor common code into a single locus or an application extension (examples : content for the notification center, photo editing interfaces, …).

The anatomy of a Xcode project changed with Xcode 4.2.  Prior to this version, an iOS Xcode Project included the following items :

To build a project is to compile its code and assemble the compiled code, together with various resources, into the app. To run a project is to launch the built app, in the Simulator or on a connected device. Running the app automatically build it first if necessary. 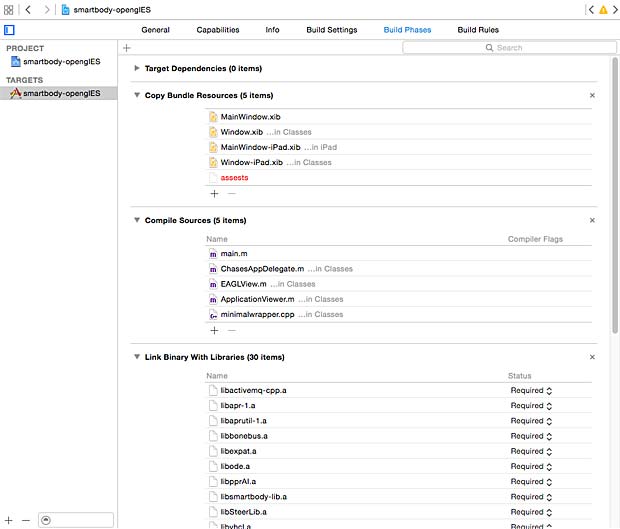 There are four build phases :

You can add build phases with the menu Editor -> Add Build Phase, for example Add Run Script Build Phase to run a custom shell script late in the build process. To check the option “Show environment variables in build log” is then a useful choice.

Another aspect of how a target knows how to build the app is Build Settings. By clciking the tab Build Settings at the top of the target editor window you will find a long list of settings : 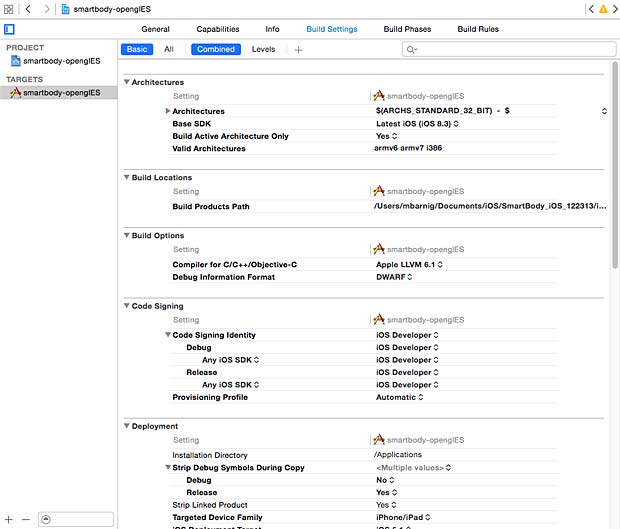 You can define what and how build settings are displayed by selecting Basic / All or Combined / Levels. There are multiple lists of build setting values, though only one such list applies when a particular build is performed. Each list is called a configuration. By default there are two configurations : 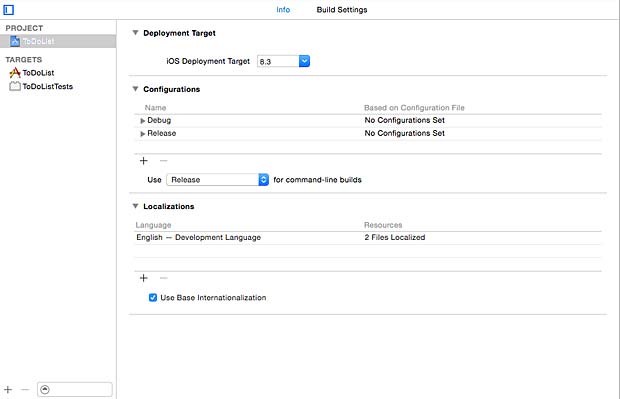 The defaults of the build settings are usually acceptable and need not be changed.

To tell the Xcode IDE which configuration to use during a particular build is determined by a scheme. A scheme unites a target with a build configuration. A new project commes by default with a single scheme named after the project.

The menu Product -> Scheme -> Edit Scheme shows the current scheme. You can also show the scheme by using the scheme pop-up menu in the Project Window Toolbar.

A scheme has the following actions : 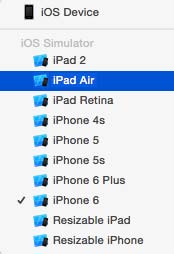 Hierarchically appended to each scheme listed in the scheme pop-up menu are the destinations. A destination is a machine that can run the app. This can be a real device connected to the Mac computer running the Xcode IDE or a virtual device simulated in the Simulator.

The menu Window -> Devices allow you to download and install additionaliOS SDK’s and to manage the devices to appear as destinations in the scheme popu-up menu.

Most of the work in an app is done by the UIApplicationMain function which is automatically called in the project’s main.m source file within an autorelease pool (memory management with Automatic Reference Counting : ARC) . An application object is created and a run loop is launched that delivers input events to the app.

The other files in an Xcode project do the following tasks :

You can add additional code to these methods that you want to be executed when the methods are called.

In a single view application, the storyboard contains only one scene. The arrow that points to the left of the scene on the canvas is the storyboard entry point, which means that this scene is loaded first when the app starts. If you have more than one scene, you can zoom the canvas in and  out with the menu Editor -> Canvas -> Zoom to see the whole content.

To adapt the generic scene in the canvas to real devices in different orientations, you must create an adaptive interface with the AutoLayout engine. The four icons Align, Pin, Resolve Issues and Resize Behavior allow to fix and manage constraints to adapt the interface. Use the assistant editor in the preview mode with the wAny and hAny icons to check the adapted interface. 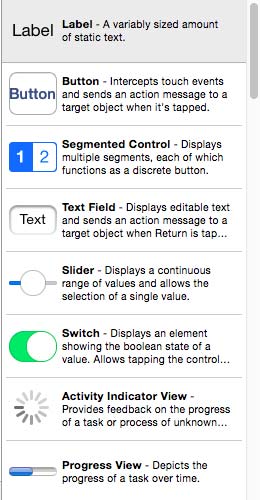 The library of objects provides UI elements (views, buttons, text labels, gesture controllers, …) to arrange the user interface. The size of UI elements can be modified by dragging its resize handles (small white squares) on the canvas.

The UIScreen object represents the physical iPhone or iPad screen. The UIWindow object provides drawing support for the screen. UIView objects are attached to the UIWindow object and draw their contents when directed to do so by the window. The visual interface of an app is essentially a set of UIView objects (views), which are themselves managed by UIViewController objects. UIViewController objects interact with views to determine what’s displayed by the views, handle any interactions with the user, and perform the logic of a program.

The views have following properties :

UIKit views are grouped in the following general categories :

The storyboard is not the only way to program an interface, you can also use .xib files or custom code. Storyboard and .xib files are converted to a bundle of NIB files at compilation.

Anatomy of an App

An app file is a special kind of folder called a package, and a special kind of package called a bundle. Use the Finder to locate the HelloWorld.app on the Mac computer. By default it is located inside a build folder in the user directory at Library/Developer/Xcode/DerivedData/.

Right clicking on the filename HelloWorld.app opens a pop-up menu with the submenu “Show Package Contents“. The following items are inside the bundle :

It is legal for a target to be a bilingual target that contains both Objective-C and Swift code. To assure communication between the two languages, Xcode provides bridging headers.

Additional informations about Xcode projects are available at the websites with the following links :