Referring to my recent post about the DICOM standard, this contribution presents an overview about an important entity in the medical imaging workflow : DICOM image viewers. The list is not exhaustive; I did the following segmentation to present my personal selection of current DICOM image viewers :

Today one project is generally considered as a reference for DICOM applications : OsiriX.

The OsiriX project started in November 2003. The first version was developed by Antoine Rosset, a radiologist from Geneva, Switzerland, working now at the La Tour Hospital  in Geneva. He received a grant from the Swiss National Fund to spend one year in UCLA, Los Angeles, with Prof. Osman Ratib, to explore and learn about medical digital imaging. In October 2004, Antoine Rosset went back to the Geneva University Hospital in Switzerland, to continue his career as a radiologist, where he published an OsiriX reference article in June 2004 in the Journal of Digital Imaging. Joris Heuberger, a mathematician from Geneva, joined the project in March 2005 on a voluntary fellowship of 6 months in UCLA, Los Angeles. In June 2005, OsiriX received two prestigious Apple Design Awards : Best Use of Open Source and Best Mac OS X Scientific Computing Solution. Osman Ratib, Professor of Radiology in UCLA, returned to Geneva at the end of 2005 as the chairman of the Nuclear Medicine service.

In March 2009, Antoine Rosset, Joris Heuberger and Osman Ratib created the OsiriX Foundation to promote open-source in medicine. In February 2010, Antoine Rosset and Joris Heuberger created the company Pixmeo to promote and distribute the OsiriX MD version, certified for medical imaging. This version complies with the European Directive 93/42/EEC concerning medical devices. The price for a single licence is 678 EUR. The free lite version can be downloaded from the OsiriX website, the source code is available at Github.

OsiriX runs on Mac OSX and is released under the version 3 of the GNU Lesser General Public License. The current version is 7.0 and was released on December 7, 2015. Osirix can also be configured as a PACS server. The power of OsiriX can be extended with plugins. 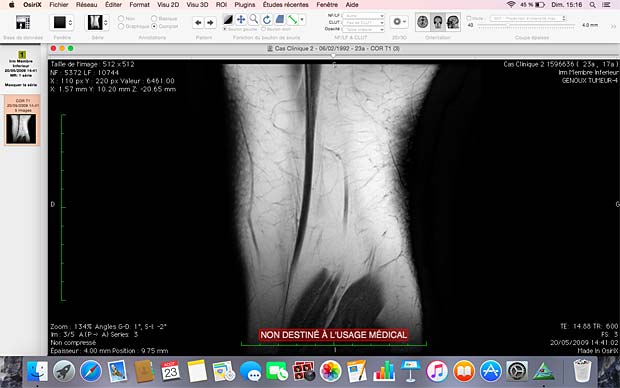 An Osirix HD version for the iPad is available at the AppStore for 49,99 EUR.

DCMTK is a collection of libraries and applications implementing large parts the DICOM standard. It includes software for examining, constructing and converting DICOM image files, handling offline media, sending and receiving images over a network connection, as well as demonstrative image storage and worklist servers. DCMTK is is written in a mixture of ANSI C and C++. It comes in complete source code and is made available as open source software.

DCMTK is an ancestor of DICOM applications. In 1993, before the official release of the standard, a DICOM prototype implementation was created by OFFIS, the University of Oldenburg and the CERIUM (Centre Européen d’Imagerie à Usage Médical) research centre in Rennes (France) on behalf of the European Committee for Standardization (CEN/TC251/WG4).

The current version of DCMTK is 3.6.1, released in June 2015. The related snapshot is available at the dicom.offis.de website. DICOMscope is the related free DICOM viewer which can display uncompressed, monochrome DICOM images from all modalities and which supports monitor calibration according to DICOM part 14 as well as presentation states. DICOMScope 3.6.0 for Windows, implemented in a mixture of Java and C++, was released in 2003. DICOMscope can’t be installed on newer Windows systems (Vista, Windows 7, Windows 8.1), an error 105 (setup.lid missing) is issued. 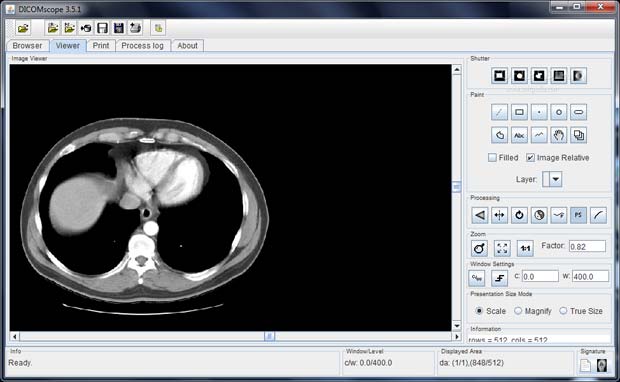 Some DCMTK modules, especially those that are not part of the free toolkit, are covered by a separate license which can be found in the COPYRIGHT file in the corresponding module directory. These tools can be evaluated during a period of four months, any further use of the software requires a full licence agreement, free of charge.

The following sub-packages are part of DCMTK :

dcm4che2 is a collection of open source applications and utilities for the healthcare enterprise developed in the Java programming language. dcm4chee2 is a DICOM Clinical Data Manager system.

dcm4che2 contains a number of useful sample applications that may be used in conjunction with dcm4chee, with another archive application, or to operate on DICOM objects in a standalone fashion. A list of the dcm4che2 utilities is shown hereafter :

The dcm4che history states that back around the year 2000, Gunter Zeilinger wrote the popular JDicom utility suite using commercial Java DICOM Toolkit (JDT). After this experience, he decided to develop his own toolkit and to name it after Che Guevara.
dcm4che and dcm4chee are licensed under an MPL/GPL/LGPL triple license, similar to Mozilla. 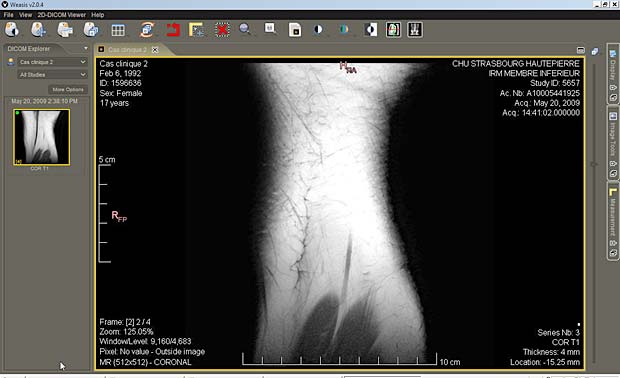 The current version is gdcm-2.6.3, released on January 27, 2016. The GDCM source code is available at Github. A Wiki is available at Sourceforge, a reference to GDCM is available at Wikipedia. The project is developed by Mathieu Malaterre (malat) from Lyon, France.

Most open source DICOM viewer projects are web viewers based on HTML5, CCS3 and Javascript. The big advantage of these viewers is the cross-platform compatibility; they can be used with any modern browser.

DICOM web viewers are presented in a separate contribution. Among them are the following open source projects :

There are also some non web open source DICOM viewers :

3D Slicer is a free and open source software package for image analysis and scientific visualization. It’s more than a simple DICOM viewer. This outstanding project started as a masters thesis project between the Surgical Planning Laboratory at the Brigham and Women’s Hospital and the MIT Artificial Intelligence Laboratory in 1998.

3D Slicer is written in C++, Python, Java and Qt and can be compiled for use on multiple computing platforms, including Windows, Linux, and Mac OS X. 3D Slicer needs a powerful computer to run. The current version is 4.5.0-1, released on November 11, 2015. It’s distributed  under a BSD style, free, open source license. More than 50 plug-ins and packages of plug-ins are available. 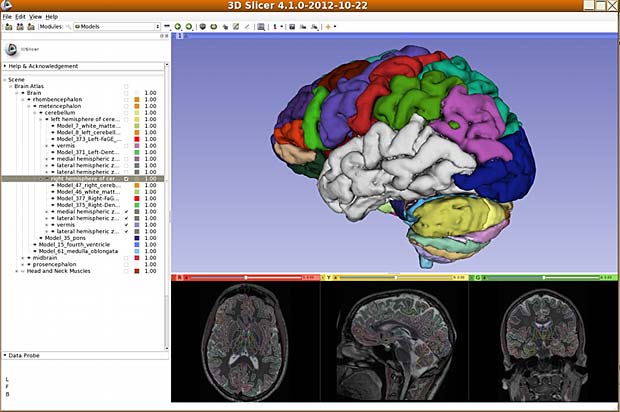 The main developers are now Steve Pieper, Slicer’s principal architect and Ron Kikinis, Principal Investigator for many Slicer-related projects. The names of all contributors are available at the 3D slicer.org website.

3DimViewer is a lightweight 3D viewer of medical DICOM datasets distributed as open source software. The viewer is multiplatform software written in C++ that runs on Windows, Linux and Mac OSX systems.

3DimViewer is developed by 3Dim Laboratory s.r.o., a company specializing in applications of modern computer graphics in medicine and developing innovative solutions. Founded since 2008, the company focuses on medical image processing, 3D graphics, geometry processing and volumetric data visualization. The company office is located in Brno, Czech Republic, next to many high tech companies inheriting the spirit of South Moravian Innovation Centre. 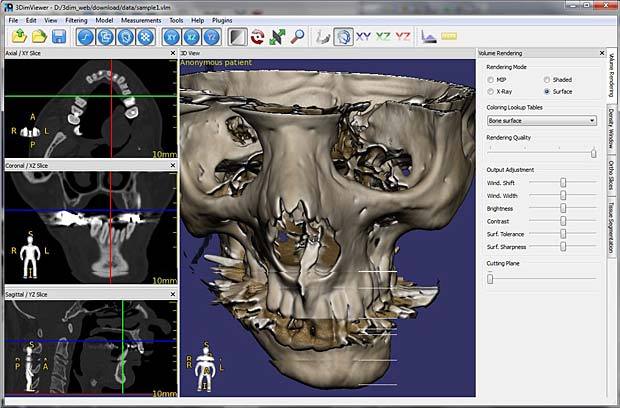 The current version of 3DimViewer is 2.2, released on February 6, 2015. Several plugins are available to extend the functions. Binaries are available for download on the 3DimLab website, source code is available at BitBucket.

GDCMviewer is the simple tool that show how to use vtkGDCMImageReader. It is basically only just a wrapper around GDCM. The tool is meant for testing integration of GDCM in VTK.

Most free proprietary DICOM viewers are copyrighted by their owner and are available for use, as is, free of charge, for educational and scientific, non-commercial purposes. Some of them are included on DICOM CDs provided by the hospitals to the patients.

Mango (short for Multi-image Analysis GUI) is a viewer for medical research images, developed by Jack L. Lancaster, Ph.D. and Michael J. Martinez at the University of Texas.

There are several versions of Manga available : 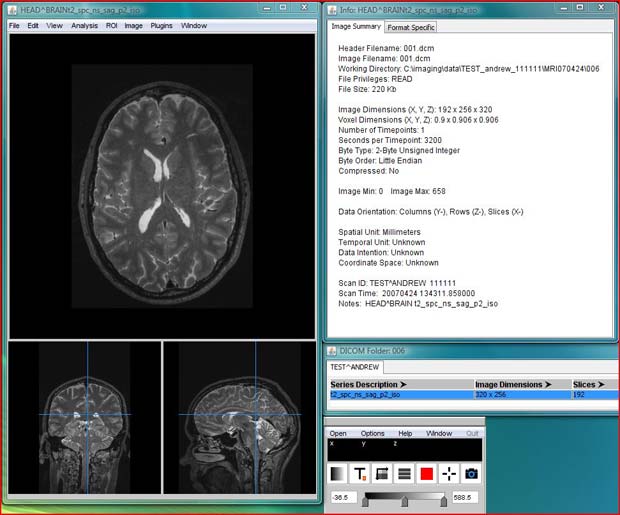 The Orpalis DICOM Viewer is a free tool for medical staff to view DICOM files. The current version 1.0.1, released on June 20, 2014, should run on any 32- or 64-bit Windows System, but I experienced serious problems on my Windows 8.1 system (thumbnails are not displayed, frequent viewer crashes, …). The ORPALIS DICOM Viewer is based on the GdPicture.NET SDK. 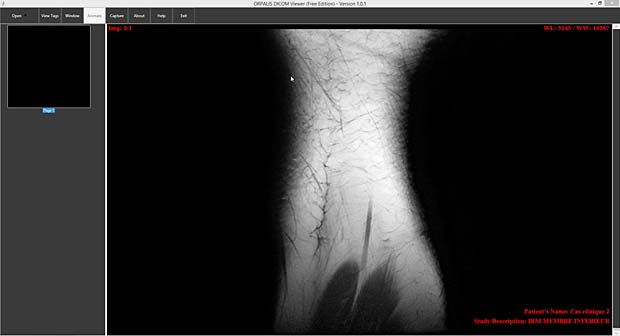 MicroDicom is an application for primary processing and preservation of medical images in DICOM format, with an intuitive user interface and being free for use and accessible to everyone. MicroDicom runs on Windows, the current version is 0.9.1, released on June 2, 2015. 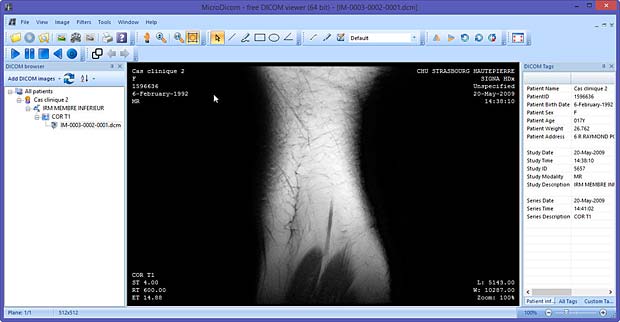 You can download and evaluate the software for free, but you need a license for using it in a commercial environment. The price for one license is 245 EUR, for use on up to three computers. 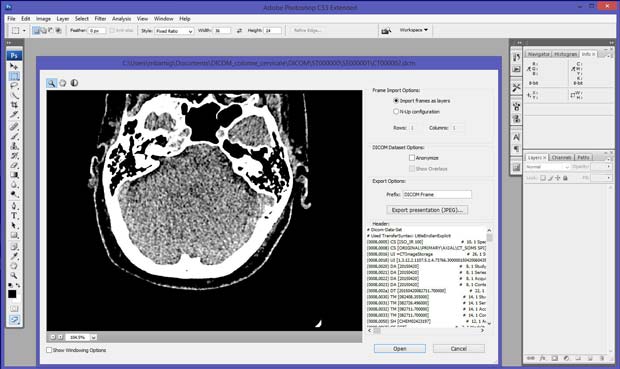 Dicomizer is a Point-Of-Care Imaging and Reporting tool provided by H.R.Z Software Services LTD in Tel-Aviv, Israel. The company is specialized in developing Medical Device, Healthcare IT, DICOM and HL7 solutions and provides medical imaging consultation, development services and professional courses. The company was founded in 2002 (formerly RZ Software Services) by Roni Zaharia, a medical imaging and connectivity expert, who is acting as its CEO. Roni Zaharia is the author of the blog DICOM is easy, providing useful news about medical images and an outstanding DICOM tutorial. Dicomizer works on Windows, the current version is 5.0. The price of a licence is $470 USD, a free evaluation version is available. The annual update costs are  $120 USD. Dicomizer can also be used as an DICOM image generator. 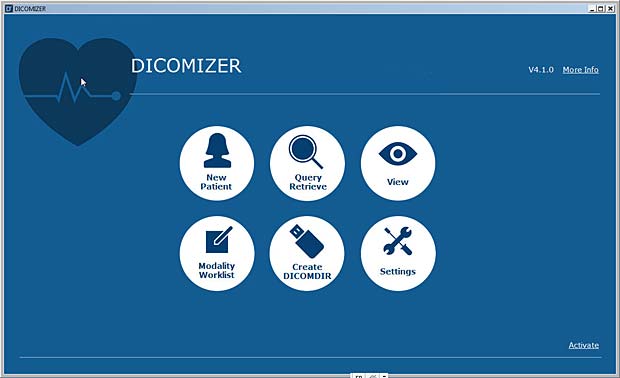 MedImaView is a multi-modality DICOM viewer with an intuitive Windows Graphical User Interface. It’s part of PowerDicom Technologies, an All-in-One application for handling DICOM files developed by DICOM Solutions, an MHGS company. Licenses for PowerDicom (version 4.8.6 released on May 4, 2015) are available in a price-range from 39 EUR to 310 EUR. PowerDicom allows also the generation of DICOM images. A free trial version can be downloaded from the DICOM Solutions website. MedImaView (version 1.8) is free for personal use and students. 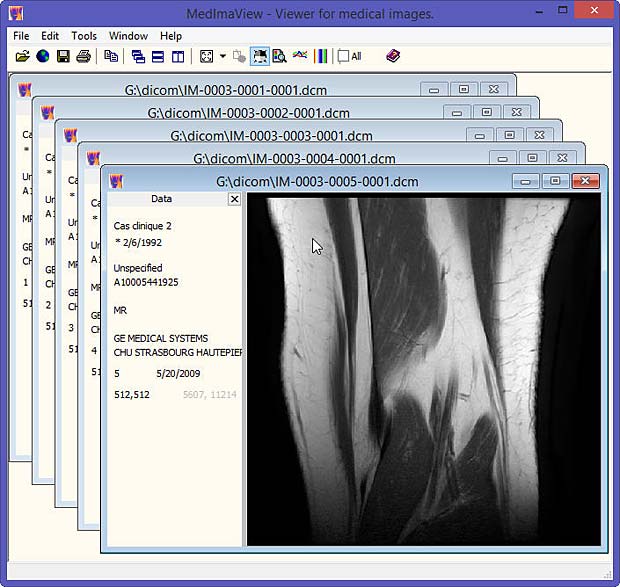 DICOM PowerTools are developed by Laurel Bridge who provides imaging workflow solutions and DICOM software products to the medical imaging industry. PowerTools are a suite designed for the testing, troubleshooting, or debugging of applications that use DICOM communications. PowerTools also provides for the viewing, repair, or creation of DICOM data sets and their contents. 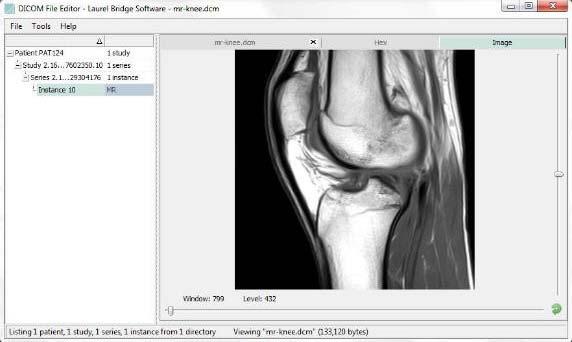 RadiAnt is a DICOM viewer for medical images designed with an intuitive interface and unrivaled performance. It runs on Windows, the latest version is 2.2.8.10726, released on December 11, 2015. The prices for a license range from 72 EUR to 400 EUR. A free evaluation version is available. RadiAnt is not certified as a medical product and is not intended for diagnostic purposes. RadiAnt is developed by Medixant, a small, privately funded company that was first formed by Maciej Frankiewicz in 2011 in Poznan, Poland. 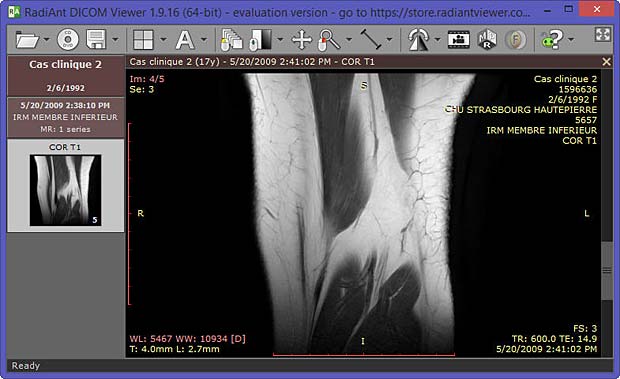 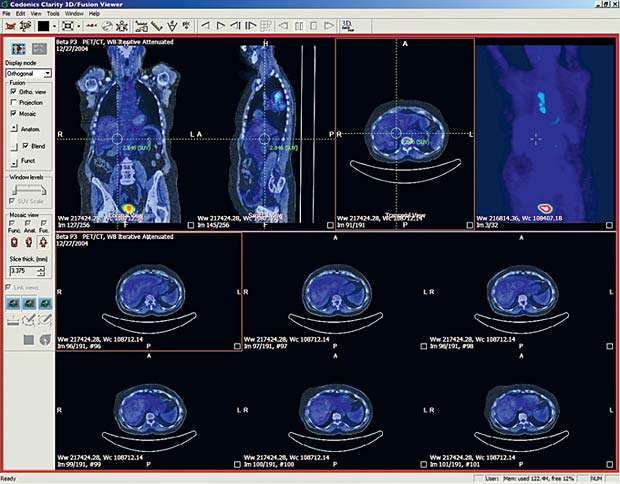 The mobile DICOM viewers are presented in a separate contribution.

The following list shows links to websites with additional informations about DICOM viewers :