Sometimes it’s useful to create a WLAN (wireless network) between two or more Wi-Fi-enabled computers without using an Wi-Fi router. These computer-to-computer networks are usually referred to as AdHoc wireless networks.

On a Mac OSX (Yosemite 10.10.5) it’s easy to set up such a network. Choose Create Network from the Wi-Fi status icon in the menu bar. Enter a name (in my case : radiologic-open) for the new network and select the channel (default channel = 11). You will notice that there is no password protection to secure the network. A WEP (Wired Equivalent Encryption) algorithm was however available in previous versions of the OSX system. WEP was Wi-Fi’s first encryption standard and was almost intentionally designed to be weak due to issues related to the US export policies about encryption. WEP was deprecated in 2003 and replaced by WPA2 (Wi-Fi Protected Access) by the Wi-Fi Alliance.

In Yosemite, Apple killed WEP once for all, without replacing it by another protection method in AdHoc mode. 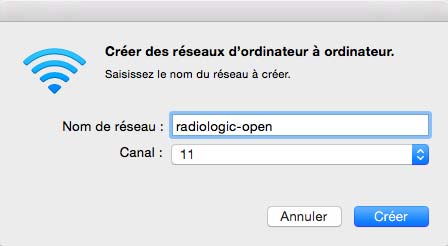 Chose name and channel for the AdHoc network 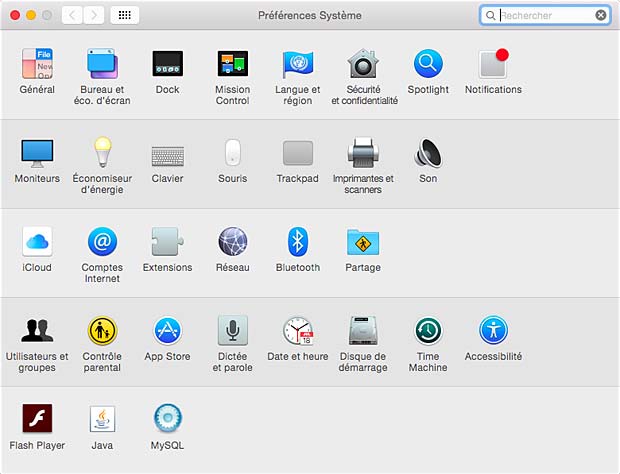 The Wi-Fi status menu shows the established connection with the radiologic-open network. The menu allows an easy logout and reconnection to another Wi-Fi network. An automatic logout occurs when the Mac screen is powered off. 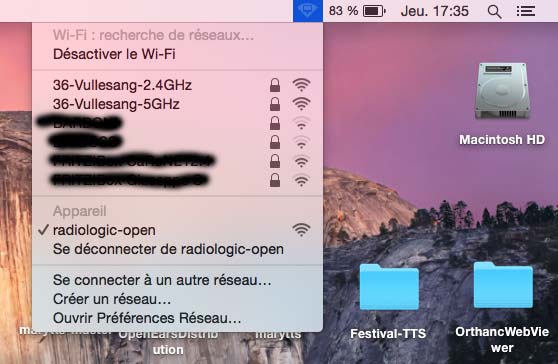 There exist a second possibility to set up a Wi-Fi network on Mac OSX. The computer is configured as a software Wi-Fi base station. This allows to share an Internet connection and offers a password protection, but it has another inconvenience. You need a working wired Ethernet connection between your Mac and a hub, even if the hub is not connected to the Internet. The next picture shows my test setup: my MacBookAir is connected via a Ethernet-Thunderbolt interface to an ancient 10 Mbit/s Ethernet hub. 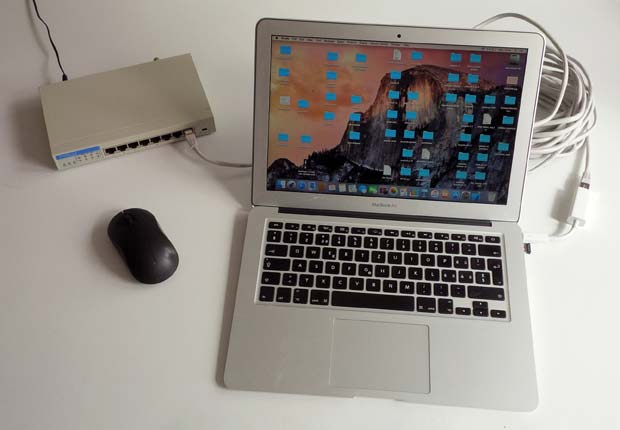 First you need to configure the Ethernet-Thunderbold interface. Go to Network in System Preferences and select the automatic configuration. The interface gets a self-assigned IP address in the range 169.254.x.x. 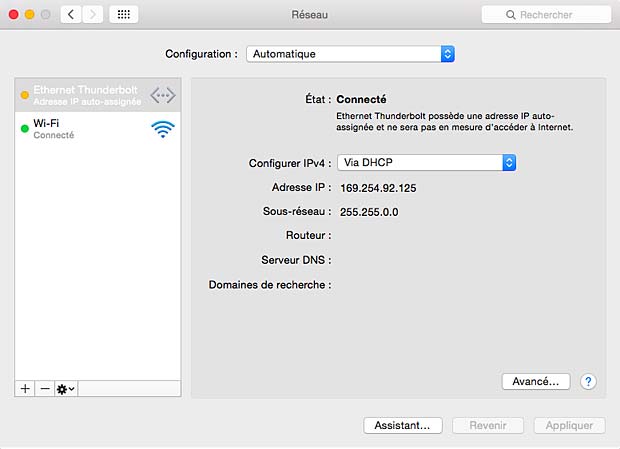 In the next step go to the Sharing Preference Pane in the System Preferences. Select Ethernet-Thunderbold as source port and Wi-Fi as destination port. Select Wi-Fi options to enter a name (in my case : radiologic-secure) of the network, to select a channel and to define a password (minimum 8 characters; numbers are not recognized on BlackBerry and Android). 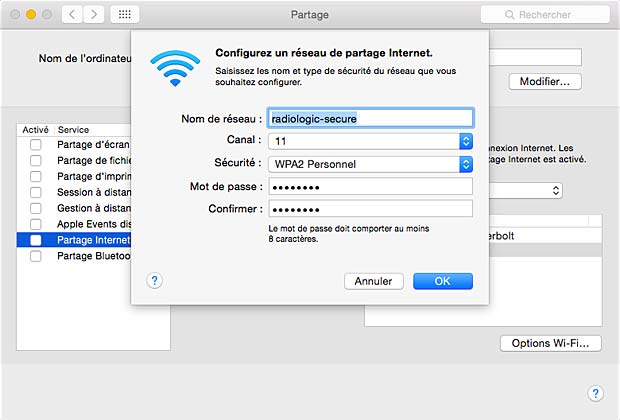 Finally check the Internet sharing checkbox and confirm the settings to activate the connection. 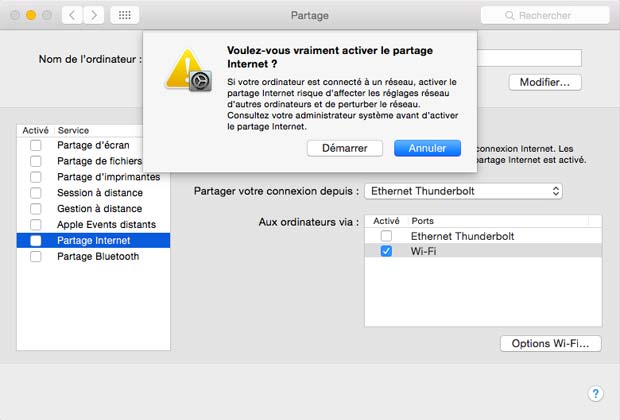 The resulting pane is shown below. 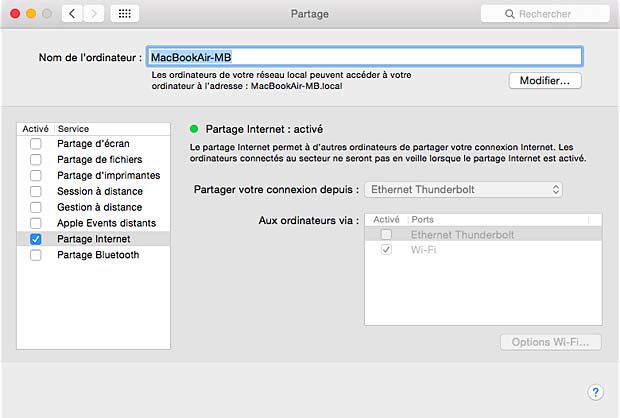 The Wi-Fi status is updated automatically. To log out, desactivate the Wi-Fi connection in the corresponding menu. An automatic logout occurs when the Mac screen is powered off. 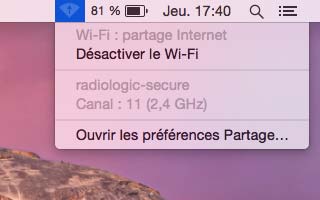 The following table shows which of my devices are capable to connect to the Mac OSX AdHoc and Infrastructure networks.

To detect the reasons why some devices don’t connect to the Mac OSX Wi-Fi AdHoc or Infrastructure networks, you can use a WLAN analyser. Mac OS X Yosemite has an in-built Wi-Fi scanner to help you find the best Wi-Fi channel. When you hold down the option key ⌥ (next to the CTRL key) and select the Wi-Fi icon in the menu bar, a secret dropdown menu opens. 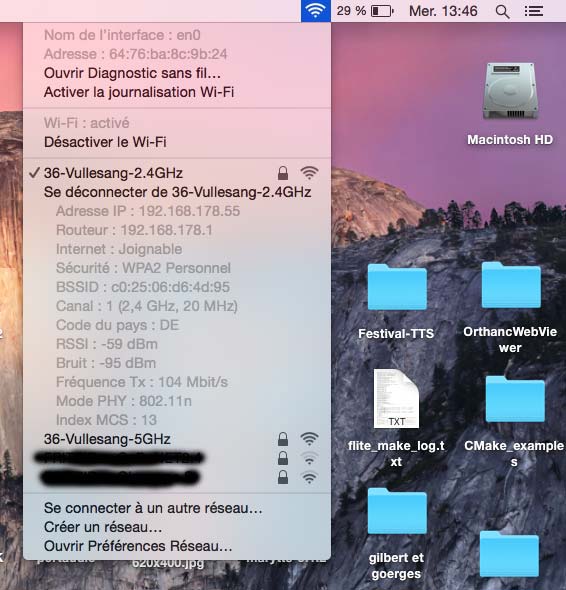 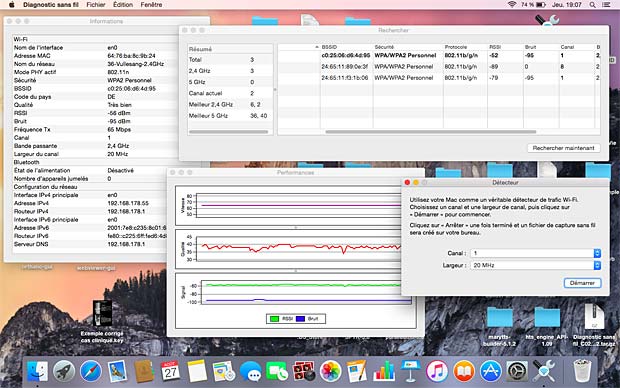 Another WLAN tool is available on Windows computers. When you enter the command

in the command window, you will get the following results : 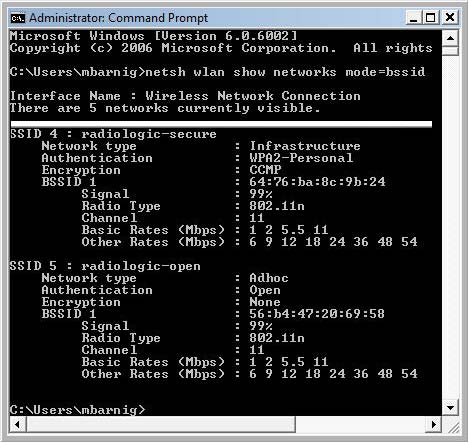 A third WLAN tool is integrated in my Wi-Fi router FritzBox 7390. Various wireless networks in my neighborhood are shown, but nor the channels used by the Mac OSX nor the names of these networks are listed. I don’t know why ? 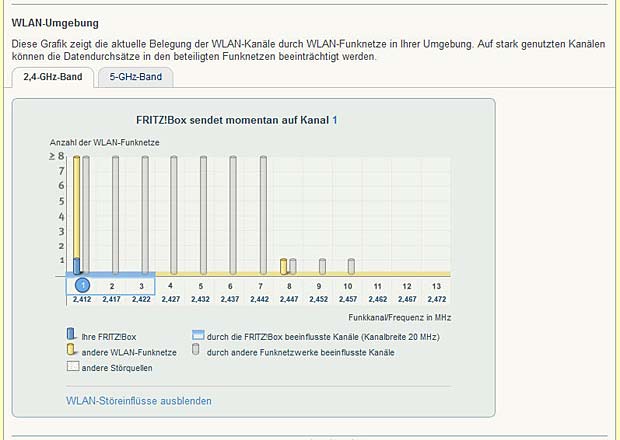 Wi-Fi channels used in proximity of the Fritzbox 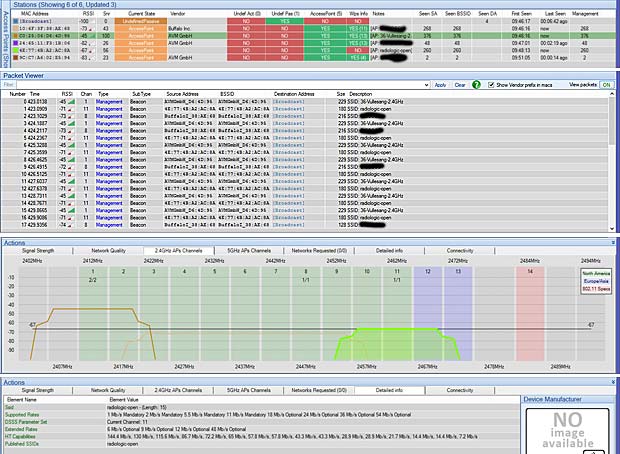 Several methodologies are available dealing with safety aspects of wireless networks, for example :