DICOM (Digital Imaging and Communications in Medicine) is a software integration standard that is used in Medical Imaging. It’s success relies on the ability of modern imaging equipment, manufactured by many different vendors, to seamlessly collaborate and integrate together. Medical imaging equipments are called Imaging Modalities and include X-Rays, Ultrasound (US), Computed Radiography (CR), Computed Tomography (CT), Magnetic Resonance Imaging (MRI), Endoscopie (ES),  and others.

The Digital Imaging and Communications in Medicine (DICOM) standard (now ISO 12052) was first conceived by the American College of Radiology (ACR) and the National Electrical Manufacturers Association (NEMA) in 1983. DICOM changed the face of clinical medicin. The release 3 of the standard was published in 1993 and since then an updated version is edited every year.  The current version is PS3-2016b. The DICOM standard is often considered to be be very complicated or tricky, the publication is now more than 3.000 pages long. A list of the 18 parts (parts 9 and 13 were retired) of the DICOM standard is shown below :

The DICOM standard is promoted by IHE (Integrating the Healthcare Enterprise), an initiative by healthcare professionals and industry to improve the way computer systems in healthcare share information.

The DICOM core is a file format and a networking protocol.

All medical images are saved in DICOM format, but DICOM files contain more than just images. Every DICOM file holds informations about the patient, the context of the study, the type of equipment used etc.

All medical imaging equipments that are connected to a health network (hospital, …) use the DICOM network protocol to exchange informations, mainly images and binary data. This protocol allows to search for medical images in an archive and to download them to a doctor’s workstation in order to display them.

The name instance, instead of image, was introduced some years ago, because there are now DICOM objects at the fourth level which are not images. These objects are sometimes called DICOM P10 instances with reference to the PS3.10 DICOM standard.

Each of the levels can contain several sub-levels. The following figure shows the DICOM information hierarchy : 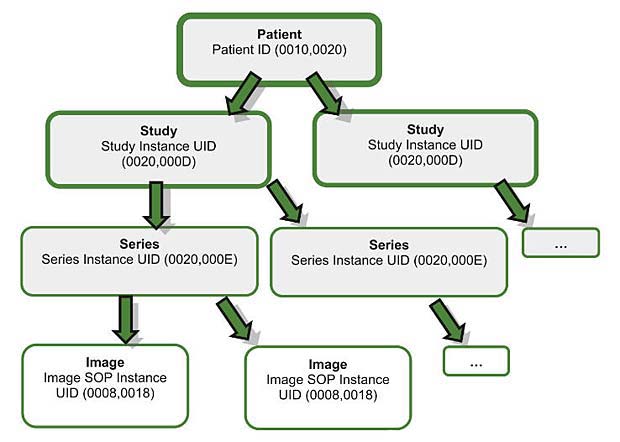 One patient may have multiple studies at different times, each study may include several series with one or more instances.

The DICOM Information Modules are used to group attributes into logical and structured units. Modules can be mandatory, conditional, optional or user-defined. DICOM specifies for each IE the modules it should include. For example, the patient IE should include the patient module, the specimen identification module and the clinical trial subject module. All DICOM objects must include the SOP common module and the four modules of the data model. All DICOM instances that are images must include the Image module.

The attributes of an IOD are encoded as Data Elements.

Let’s summarize the chapter about DICOM objects in a few other words :

DICOM objects are encoded in binary form as sequential lists of attributes, called Data Elements.  Every data element has : 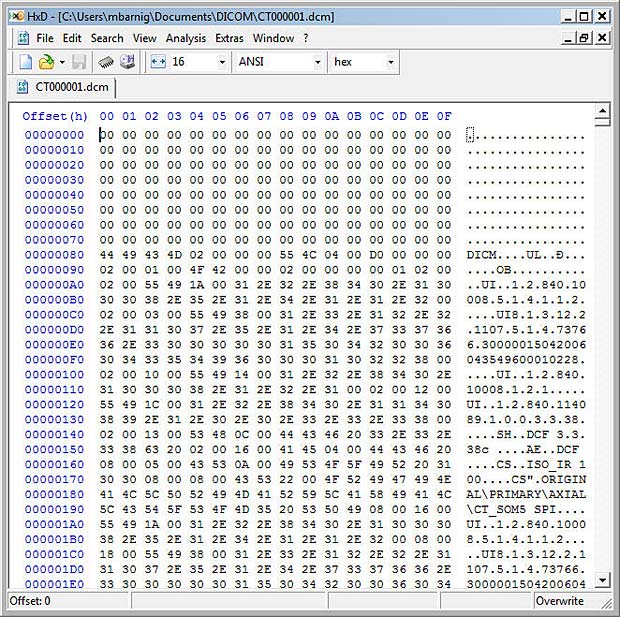 There are thousands of different DICOM data elements with a well specified meaning. The names of the data elements are referenced in a DICOM dictionary. Here are some examples :

There are only two modules that are specific to SC (Secondary Capture), the other modules are common and shared by many IODs. Every module is rather large and includes lots of data elements, but luckily most of these data elements are optional. In the DICOM standard the modules are marked with a type column :

Values 1 and 2 can also been marked as c for conditional.

DICOM makes extensive use of Unique Identifiers (UIDs). Almost every entity has a UID, with the exception of the patient (patients are identified with their name and their ID). DICOM defines a mechanism in order to make sure UIDs are globally unique. Every DICOM application should acquire a root UID that is used as a prefix for the UIDs it creates.

Usually the Study Instance UID is provided through a DICOM service called Modality Worklist. The Series UID and the SOP Instance UID are always generated by the application. 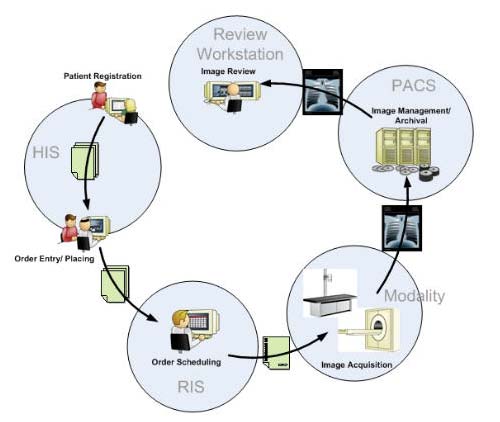 The workflow begins when the patient gets registered in the Hospital Information System (HIS). An Electronic Medical Record (EMR) is generated for the new patient. A medical procedure, for example an X-Ray of the thorax, is ordered and placed into the Radiology Information System (RIS). The RIS generates a study scheduled and sends an HL7-event to a HL7-DICOM gateway. The gateway sends the study scheduled event to the Picture Archiving and Communication System (PACS) to prefetch previous exams of the patient. When the patient arrives at the modality (X-Ray in this example), the technologist requests the Modality Worklist (MWL : a sort of task manager) and updates the RIS. The acquired images are forwarded to the PACS where they are checked, stored and forwarded to the review workstation of the radiologist. The radiologist views the study images and reports possible pathologies.

The main DICOM nodes in this workflow are the Modality, the PACS and the Workstation. DICOM’s network communication is based on the ISO/OSI model. The entities (nodes) in the network are specified with the following parameters :

With the parameters of the source and the target AE, we can start a per-to-peer session called Association. This is the first step of a DICOM network communication. The second step is exchanging DICOM commands. Most problems in DICOM communications are related to failing association negotiations. Errors are reported in the DICOM log.

The calling AE sends an Association Request to the target (called) AE. It’s a description of the application, its capabilities and its intentions in this session (presentation context). The called AE checks the request and sends back an Association Response, confirming what can and can’t be done. If its doesn’t match, the calling AE can reject the association. An important parameter is the Max PDU Size, an application level packet that says how big is the buffer consumed for the request. Some calling application entities uses buffer sizes too large for the called application entity; the result can be a crash due to a buffer overflow. In case of none-response by the called AE, the request will timeout.

A DICOM service related to the exchange step is Storage Commitment (SCM) that lets you verify if files sent to a PACS where indeed stored correctly. The result is sent using the N-EVENT-REPORT command.

DICOM services are used for communication within an entity and between entities. A service is built on top of a set of DICOM Message Service Elements (DIM-SEs) adapted to normalized and composite objects. DIM-SEs are paired : when a device issues a command, the receiver responds accordingly.

DICOM services are referred to as Service Classes. A Service Class Provider (SCP) provides a service, a Service Class User (SCU) uses a service. A device can be an SCP, an SCU or both. The following table shows the main DIM-SE’s : commands with a C-prefix are composite and those with a N-prefix are normalized.

A fundamental service implemented by every workstation is the Query / Retrieve (Q / R) task. The query is done with C-FIND. The keys to search are Patient Name, Patient ID, Accession Number, Study Description, Study Date, Modality, … The Retrieve is done with C-MOVE and C-STORE commands.

To transmit DICOM objects through a network or to save them into a file, they must be serialized. The DICOM Transfer Syntax defines how this is be done. There are 3 basic transfer syntaxes presented in the next table :

LEI is the default Transfer Syntax which shall be supported by every conformant DICOM Implementation. Compressed pixel data transfer syntax are always explicit VR little Endian. The following compression methods can be used :

If DICOM objects are serialized into files, there are additional informations to provide :

Group 0002 data elements are strictly used for files and must be removed before sending DICOM objects over the network.

If DICOM files are saved on a standard CD / DVD, they should have a file named DICOMDIR in its root directory. DICOMDIR is a DICOM object listing the paths to the files stored on the media. The file names of these files should be capital alphanumeric up to 8 characters with no suffix. An example of naming conventions is shown hereafter :

DICOM files stored in the cloud or on a non-DICOM media have the suffix .dcm.

Because imaging is the heart of DICOM, we will deal with the bits of images in a specific chapter called pixel data. The data elements of the pixel module have group number 0028 and are responsible for describing how to read the image pixels. The next table shows the different data elements :

The group number of the image data element is 7FE0 to be sure that this element is the last in the DICOM object. It is usually a very long data element and can be easily skipped if we want to read only the headers.

The Image Plane Module defines the direction of the image with reference to the patient body. It also gives the dimensions of the pixels in mm. The corresponding data element has tag 0020, 0037. DICOM defines a Reference Coordinate System (RCS) of the patient body.

These letters are usually displayed on the sides of a DICOM viewer. If the patient is in an oblique position, there can be letter combinations like [PR] for Posterior Right or [ALH] for Anterior Left Head.
onformance Statement

Additional informations about the DICOM standard are available at the following websites :