The term anamorphic refers to a distorted image that appears normal when viewed with an appropriate lens. When shooting film or video, an anamorphic lens can be used to squeeze a wide image onto a standard 4:3 aspect ratio frame. During projection or playback, the image must be unsqueezed, stretching the image back to its original aspect ratio.

By default, 16:9 anamorphic video displayed on an standard monitor appears horizontally squeezed, meaning images look tall and thin. The advantage of this was in the past that producers could shoot wide-screen material using inexpensive equipment. Rescaling anamorphic video in order to see the entire wide screen frame on a standard definition 4:3 monitor is called letterboxing, and results in the loss of the maximum resolution available in the source footage. A wide screen (16:9) allows video-makers more room for creativity in their shot composition.

To check the support of anamorphic videos by different players, I created three mp4 videos from scratch, based on squeezed test pictures : 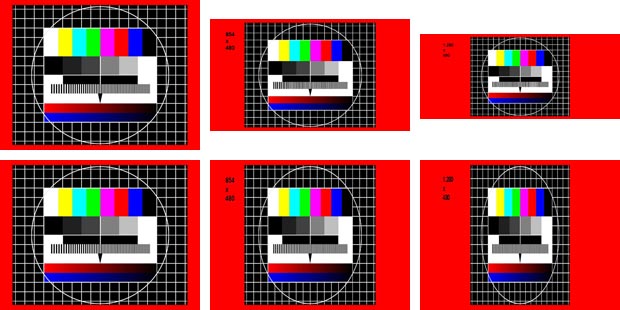 The following ffmpeg script creates a video from a squeezed source image towards a stretched widescreen video with a ratio 2.35:1.

The -aspect parameter handles the correct display aspect ratio (DAR). The MediaInfo tool shows that the video has 640×480 pixels, but an DAR of 2.35:1.

The VLC video player stretches the video based on the DAR. Videos with a wrong DAR in the metadata can be resized manually by changing the aspect ratio in the corresponding video menu.

More informations about anamorphic videos are available at the following links :