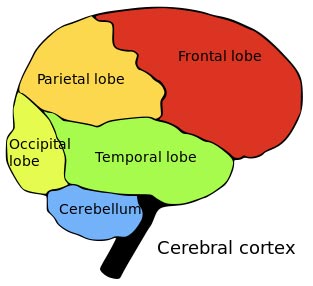 The brain is the center of the nervous system in all vertebrate and most invertebrate animals. From a philosophical point of view, what makes the brain special in comparison to other organs is that it forms the physical structure that generates the mind. Through much of history, the mind was thought to be separate from the brain. Even for present-day neuroscience, the mechanisms by which human brain activity gives rise to consciousness and thought remain very challenging to understand: despite rapid scientific progress, much about how the human brain works remains a mystery. The operations of individual brain cells are now understood in considerable detail, but the way they cooperate in ensembles of millions has been very difficult to decipher.

The human brain is divided into right and left halves (hemispheres). The left half controls movement on the body’s right side. The right half controls the body’s left side. In most people, the language area is mainly on the left. Preserved brains have a grey color, hence the name grey matter.

The brain’s wrinkled surface is a specialized outer layer of the cerebrum, called the cerebral cortex (what we see when we look at the brain). Each bump on the surface of the human brain is known as a gyrus, while each groove is known as a sulcus.

In a typical human the cerebral cortex is estimated to contain 15–33 billion neurons, each connected by synapses to several thousand other neurons. These neurons communicate with one another by means of long protoplasmic fibers called axons, which carry trains of signal pulses called action potentials to distant parts of the brain or body targeting specific recipient cells..

Traditionally the cerebral cortex is divided into four sections, which are known as lobes :

The Terminologia Anatomica (TA), the international standard on human anatomic terminology, developed by the Federative Committee on Anatomical Terminology (FCAT) and the International Federation of Associations of Anatomists (IFAA), released in 1998, defines two additional lobes : The limbic lobe, associated to emotion and memory and the insular cortex, associated to pain and some other senses.

The cerebral cortex is also segmented in cortical areas which are functionally or anatomically defined. Some examples are listed below : 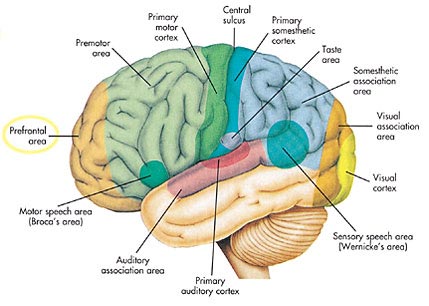 The brainstem is comprised of the hindbrain (rhombencephalon) and midbrain. The hindbrain contains structures including medulla oblongata, the pons and the reticular formation.

The limbic system contains glands which help relay emotions. Many hormonal responses that the body generates are initiated in this area. The limbic system includes the amygdala, hippocampus, hypothalamus and thalamus.

Great progresses in the analysis which parts of the brain are involved in a particular mental process have been made in the last years with the functional magnetic resonance imaging (fMRI).

More informations about human brain parts and regions are available at the following links: