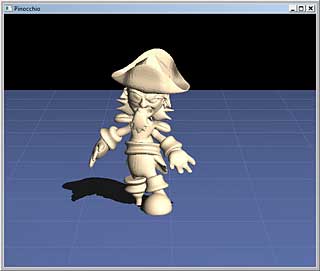 Rigging (skeletal animation) is a process used in computer animation, particularly in the animation of characters, to efficiently mimic real world skeletal systems for animation purposes. Characters are represented in two parts: a surface representation used to draw the character (called skin or mesh) and a hierarchical set of interconnected bones (called the skeleton or rig) used to animate (pose and keyframe) the mesh.

This rigging technique is used by creating a series of bones to form skeletons. Each bone in the skeleton is responsible for deforming and animating a part of the character mesh and has a three dimensional transformation (position, scale and orientation) The bones  form a hierarchy, the skeleton.

Usually the animator is assisted through inverse kinematics and other goal-oriented techniques. The benefit of rigging is that an animation can be defined by simple movements of the bones, instead of vertex by vertex changes. The drawback of rigging is that it does not provide realistic muscle movement and skin motion.

Manual rigging to specify its internal skeletal structure and to define how the input motion deforms its surface is a tedious process. Most 3D modeling & animation packages used by professionals provide inbuilt automatic rigging and skinning algorithms. An example is the BlenRig System for Blender.

An experimental auto rigging and animation tool called Pinocchio was presented in 2007 at SIGGRAPH by Ilya Baran and Jovan Popovic from the Computer Science and Artificial Intelligence Laboratory at the Massachusetts Institute of Technology (MIT). The corresponding paper “Automatic Rigging and Animation of 3D Characters” was published in the ACM proceedings of SIGGRAPH. The source files, binaries for Windows and test meshes are available from the Pinocchio project page at MIT.

A commercial standalone automatic rigging tool, called Jimmy|RIG, was created by Origami Digital LLC, to allow people to quickly apply motion capture data to their characters without the tedious process of painting weights and setting up a skeleton. Different software versions are available, a Lite version starts at 150 $US.

The following list shows some links to videos related to automatic rigging :