Subtitles are textual versions of the dialog in films and television programs, usually displayed at the bottom of the screen. They can either be a form of written translation of a dialog in a foreign language, or a written rendering of the dialog in the same language, with or without added information to help viewers to follow the dialog.

Another process of displaying text on a visual display to provide additional or interpretive information is called closed captioning (CC). Most people don’t distinguish captions from subtitles. In the United States and Canada (ATSC), these terms do have different meanings. Closed captions were created for the deaf community or hard of hearing individuals to assist in comprehension. Everything you purchase from Apple’s iTunes Store have CC subtitles, if at all. CC subtitles can be extracted with CCextractor (version 0.66 released on July 1, 2013), a free GPL licensed closed caption tool for Windows.

Read The Closed Captioning Bible by Werner Ruotsalainen about this topic.

The most basic of all subtitle formats is SubRip, named with the extension .srt, which contains formatted plain text.

Here is an example : 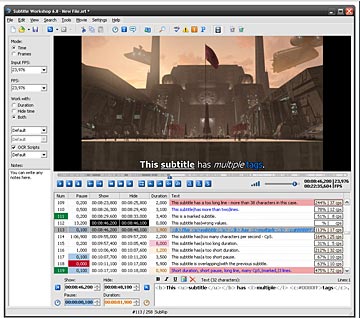 There exist a great number of subtitle formats and programs to create subtitles. An efficient and convenient subtitle editing tool that supports all the subtitle formats you need and has all the features you would want from such a tool is Subtitle Workshop (version 6.0a released on August 26, 2013) from URUWorks. It even includes spell check function and an advanced video preview feature, but it doesn’t embed the subtitles in a video file.

The following players and servers support delivering of integrated subtitles :