A speech corpus is a database of speech audio files and text transcriptions. In Speech technology, speech corpora are used to create voices for TTS (Text-to Speech) and to create acoustic models for speech recognition.

For a speech database to serve as the basis for constructing a synthetic voice, the recordings should be of studio quality and free of noise. Noise includes not just external sounds, but also unwanted breaths and clicks. The recorded utterances need to be phonetically balanced and the prosody of speech needs to be controlled so that the synthetic voice’s style of delivery is both consistent and appropriate. To satisfy these requirements it’s not sufficient to collect speech records, but you have to design a speech corpus for synthesis. The basic idea is to take a very large amount of text (millions of words) and automatically find nice utterances that match the following criteria :

Some historic speech database projects are :

If the use of a designed speech corpus should be unrestricted, we need to start from a source of written material that does not impose any copyright. In the past one such source was the Gutenberg Project (PG), a volunteer effort to digitize and archive cultural works. It was founded in 1971 by Michael S. Hart and is the oldest digital library. Most of the items in its collection are the full texts of public domain books. As most of these texts are at least 70 years old, we face the issue of language drift. Languages changed considerable over the last century and the related texts are often archaic. Today, dumps of Wikipedia are usually preferred as free sources to design a speech corpus for TTS.

In the next chapters some recent speech corpora projects are presented.

The CMU_ARCTIC databases were constructed in 2003 at the Language Technologies Institute at Carnegie Mellon University as phonetically balanced, US English single speaker databases, designed for unit selection speech synthesis research. The databases consist of around 1150 utterances carefully selected from out-of-copyright texts from Project Gutenberg. The databases include US English male and female speakers as well as other accented speakers. The distributions include 16KHz waveform and simultaneous EGG signals. Full phonetically labelling was performed by the CMU Sphinx using the FestVox based labelling scripts. No hand correction has been made. Runnable Festival Voices are included with the database distributions.

The typical structure of a CMU_ARCTIC database is shown below : 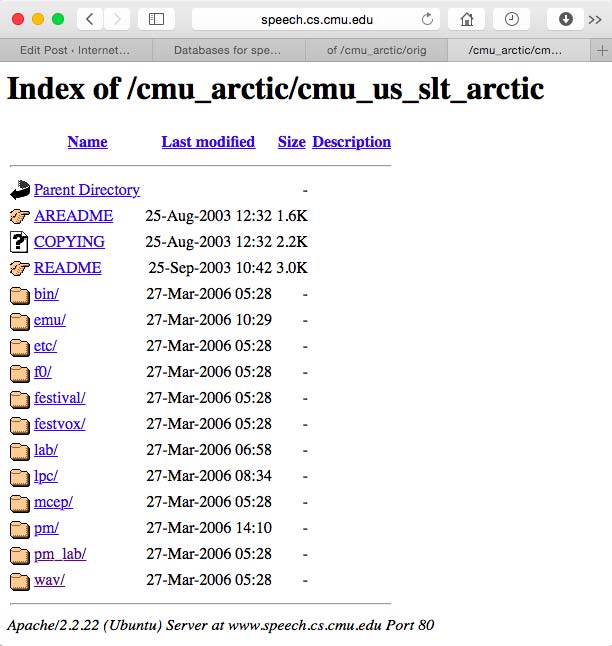 The audio data is provided in the losslessly compressed FLAC format. The speaker were recorded at a 44.1 kHz or 48 kHz sampling rate, 16 bits per sample, in mono. No filters of any sort have been applied to the raw data. Phonetic labels, automatically obtained using forced alignment using the eHMM tool from Festvox 2.1, are provided as Xwaves .lab file with the fields ENDTIME (in seconds), NUMBER (no significance) and LABEL (variant of the SAMPA phonetic alphabet.

The GitHub repository of a typical ENST or UPMC corpus is shown below : 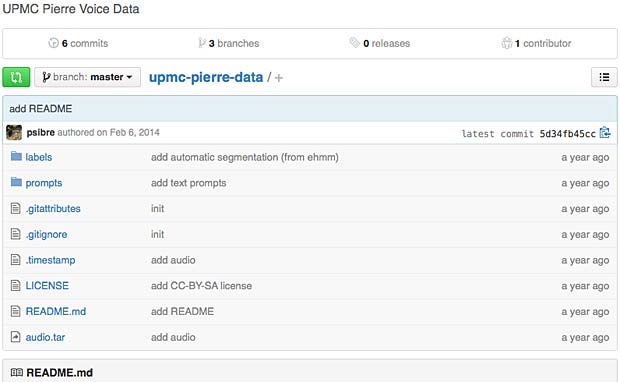 A single speaker, multi-style corpus of German speech, with a large neutral subset, and subsets acting out four different expressive speaking styles, has been designed for synthesis in 2013 in the context of the SEMAINE and IDEAS4GAMES projects. PAVOQUE is the abbreviation for PArametrisation of prosody and VOice QUality for concatenative speech synthesis in view of Emotion expression. The speaker is Stefan Röttig, a male native speaker of German, trained as a professional actor and baritone opera singer.

The audio data is provided in the losslessly compressed FLAC format. The speaker was recorded at a 44.1 kHz sampling rate, 24 bits per sample, in mono. No filters of any sort have been applied to this raw data, but low-pass filtering at 50 Hz is recommended. The manually corrected phonetic labels are provided as Xwaves .lab files with the fields ENDTIME (in seconds), NUMBER (no significance) and LABEL (variant of the SAMPA phonetic alphabet.

The GitHub repository of the PAVOQUE corpus is shown below : 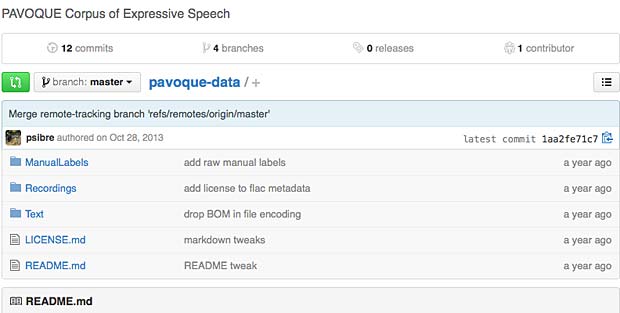 The label files (abcd.lab) can  be opened in Praat using the command