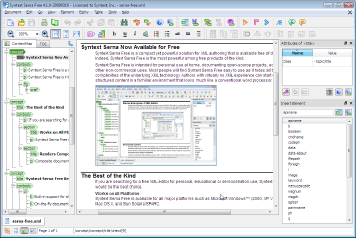 Serna Free XML editor has been developed by SYNTEXT Inc., a private American software development company, founded in Seattle, Washington, in 1999. The company is focused on the development of state-of-the-art solutions for creating and maintaining complex XML content for various industries such as aerospace, software development, publishing, and others.