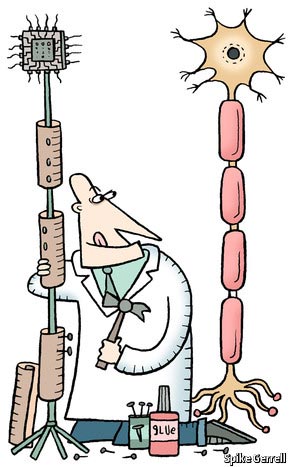 credit : Spike Gerrell for the Economist

Neuromorphic computing is a concept developed by Carver Mead, describing the use of very-large-scale integration (VLSI) systems containing electronic analog circuits to mimic neuro-biological architectures present in the nervous system. Carver Mead is a key pioneer of modern microelectronics.

Today the term neuromorphic is used to describe analog, digital, and mixed-mode analog/digital VLSI and software systems that implement models of neural systems. Neuromorphic computing is a new interdisciplinary discipline that takes inspiration from biology, physics, mathematics, computer science and engineering to design artificial neural systems and autonomous robots, whose physical architecture and design principles are based on those of biological nervous systems.

The goal is to make computers more like brains and to design computers that have  features that brains have and computers do not have up to now :

An important property of a real brain is that each neuron has tens of thousands of synaptic connections with other neurons, which form a sort of small-world network. Many neuromorphic chips use what is called a cross-bar architecture, a dense grid of wires, each of which is connected to a neuron at the periphery of the grid, to create this small-world network. Other chips employs what is called synaptic time multiplexing.

The Economist published a few days ago a great article “Neuromorphic computing – The machine of a new soul” with illustrations from the London-based illustrator Spike Gerrell.

Some neuromorphic computing reletad projects are listed below :