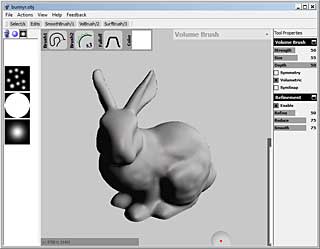 Meshmixer is an experimental easy-to-use mesh cleanup/composition/sculpting 3D modeling tool developed by Ryan Schmidt, who is a Research Scientist at Autodesk Research in Toronto, Canada. Ryan is also the author of the sketch-based implicit surface modeler ShapeShop. Meshmixer is now part of Autodesk. The current version of Meshmixer is 07, update 4, released on May 18, 2012. An up-to-date documentation is not yet available.

Meshmixer is often compared to Sculptris, a sculpting tool that Tomas Pettersson has been developing since early December 2009. Sculptris was picked up by Pixologic when Tomas Petterson joined this company in 2010. Sculptris is still available for free at the Pixologic website and the skills you learn with Sculptris can be directly translated to ZBrush, the award winning and most widely-used digital sculpting application in today’s market. The models that you create with Sculptris can even be sent to ZBrush with the click of a button using the GoZ™ functionality.

Another commercial digital sculpting program is 3D-Coat from Pilgway. It was designed to create free-form organic and hard surfaced 3D models from scratch.