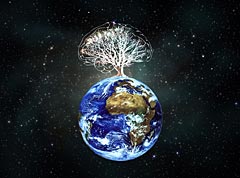 The global brain is a metaphor for the worldwide intelligent network formed by all the individuals of this planet, together with the information and communication technologies that connect them into a self-organizing whole. Although the underlying ideas are much older, the term was coined in 1982 by Peter Russell in his book The Global Brain.

The first peer-refereed article on the subject was written by Gottfried Mayer-Kress and Cathleen Barczys in 1995. The first algorithms that could turn the world-wide web into a collectively intelligent network were proposed by Francis Heylighen and Johan Bollen in 1996. Francis Heylighen reviewed the history of the concept and its usage, he distinguished four perspectives  :

These perspectives now appear to come together into a single conception.

In 1996, Francis Heylighen and Ben Goertzel founded the Global Brain Group, a discussion forum grouping most of the researchers that had been working on the subject to further investigate this phenomenon. The group organized the first international conference on the topic in 2001. In January 2012, the Global Brain Institute (GBI) was founded at the Vrije Universiteit Brussel to develop a mathematical theory of the brainlike propagation of information across the Internet. The GBI grew out of the Global Brain Group and the Evolution, Complexity and Cognition research group (ECCO).

The following list provides links to further informations about the global brain :