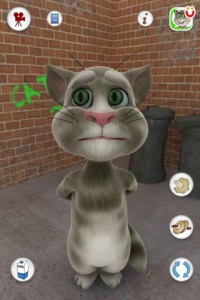 Talking Tom Cat is a free app for phones and tablets that shows a cartoon cat onscreen that repeats whatever you say into the device in a funny voice. Talking Tom Cat also responds to pokes and strokes of the screen. You can pet the cat and hear him purr. You can pour him a glass of milk and watch him drink it. Talking Tom Cat has incredible attraction for kids.

Talking Tom Cat  was created by Outfit7, a startup founded in October 2009 in Slovenia by Samo Login. The company moved its headquarters to Limassol, Cyprus in 2011. Outfit7 is known for its creation of the popular Talking Friends collection of about 20 mobile apps which have been downloaded more than 400 million times. Tom Cat is the most popular Talking Friend which has been downloaded more than 40 million times. Other characters are Gina the Giraffe, Pierre Parrot, Ben the Dog, Rex the Dinosaur, Larry the Bird, Baby Hippo, the cats Ginger and Angela and others.

In 2012 Tom Cat and his friends appeared in TV shows and music videos.

The company generates revenue through a combination of paid app downloads, in-app payments for virtual items and advertising. Tom Cat and the Talking Friends are also available as plush toys. The Talking Friend Superstars bring the apps to life and can even talk with the apps.