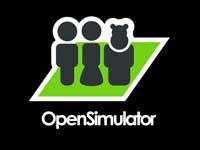 OpenSimulator (OpenSim) is a 3D Application Server that can be used to create a virtual environment (or world) similar to Second Life™. OpenSimulator is released under a BSD License, making it both open source, and commercially friendly to embed in products. Environments, protocols and features are supported via add on modules. The available modules (alternative gridservers, plugins and region modules, etc) are hosted on OpenSim Forge. OpenSimulator is powered by the community members that devote time and energy to the effort.

OpenSim is still at an alpha code maturity stage, the current latest releases is 0.7.6  released on October 4, 2013 (git source repository). OpenSimulator requires either the .Net Framework version 3.5, or Mono 2.4.3 or newer.

An up-to-date coverage of the OpenSim technology is offered in-depth by the Hypergrid Business magazine.

Some commercial providers of OpenSim virtual worlds are listed hereafter :