MaryTTS is an open-source, multilingual Text-to-Speech Synthesis platform written in Java. It was originally developed as a collaborative project of DFKI’s Language Technology Lab and the Institute of Phonetics at Saarland University. It is now maintained by the Multimodal Speech Processing Group in the Cluster of Excellence MMCI and DFKI (Deutsches Forschungszentrum für Künstliche Intelligenz GmbH).

Mary stands for Modular Architecture for Research in sYynthesis. The earliest version of MaryTTS was developed around 2000 by Marc Schröder. The current stable version is 5.2, released on September 15, 2016.

I installed Mary TTS on my Windows, Linux and Mac computers. On the Mac (OSX 10.10 Yosemite), version 5.1.2 of Mary TTS was placed on the desktop in the folders marytts-5.1.2 and marytts-builder-5.1.2. The Mary TTS Server is started first by opening a terminal window in the folder marytts-5.1 with the following command :

To start the Mary TTS client with the related GUI, a second terminal window is opened in the same folder  with the command :

As the development version 5.2 of Mary TTS supports more languages and comes with toolkits for quickly adding support for new languages and for building unit selection and HMM-based synthesis voices, I downloaded a snapshot-zip-file from Github with the most recent source code. After unzipping, the source code was placed in the folder marytts-master on the desktop.

To compile Mary TTS from source on the Mac, the latest JAVA development version (jdk-8u31-macosx-x64.dmg) and Apache Maven (apache-maven-3.2.5-bin.tar.gz), a software project management and comprehension tool, are required.

On Mac, Java is installed in

and Maven is installed in

It is important to set the environment variables $JAVA_HOME, $M2_HOME and the $PATH to the correct values (export in /Users/mbarnig/.bash-profile).

The succesful installation of Java and Maven can be verified with the commands :

in the top-level marytts-master folder. This build the system, run unit and integration tests, packaged the code and installed it in the following folders :

The build took 2:55 minutes and was succesful, without errors or warnings. 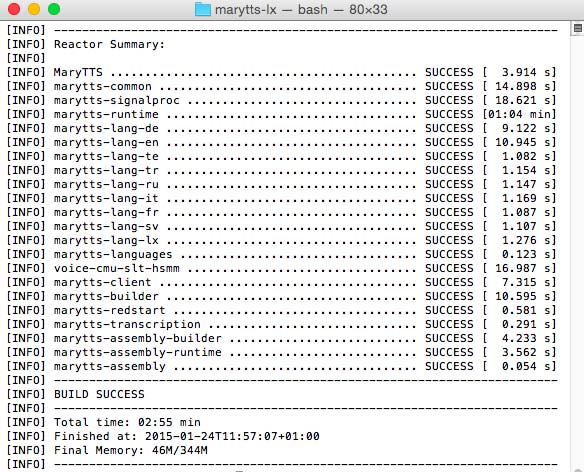 The following modules have been compiled :

After checking the whole file structure, I started the Mary TTS 5.2 server

and the Mary TTS 5.2 client 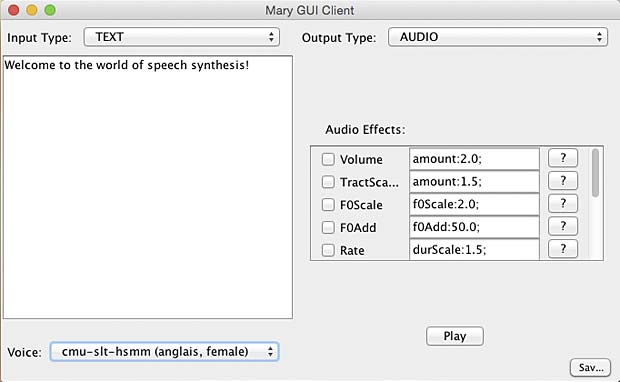 and finally installed some french, german and english available voices. 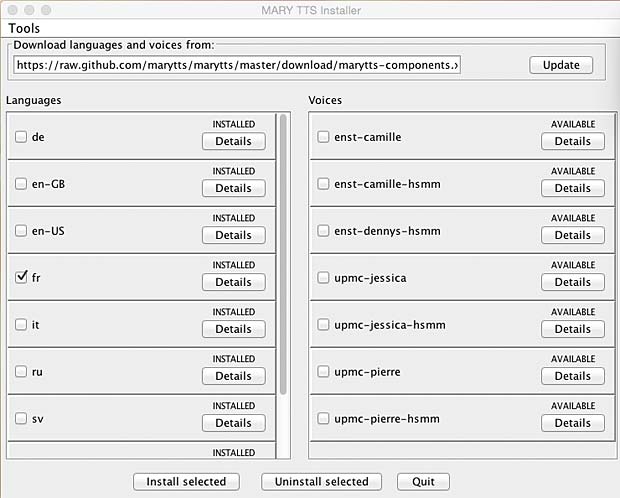 In the next step I will try to create my own voices and develop a voice for the luxembourgish language.

In January 2017, I updated my systems with the stable MaryTTS version 5.2 which supports the luxembourgish language.