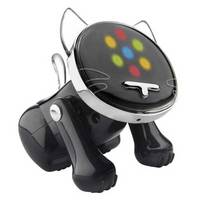 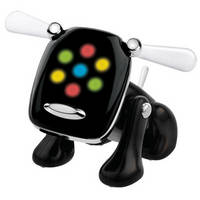 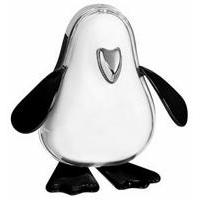 In 2005, SEGA Toys introduced a small robot dog called i-dog in Japan which played about 70 stored children’s songs and other favorites. A sensor on top of the dog was used to control the tempo of the song playback. The i-dog was also able to mimic the owners voice with sound that had similar wavelengths. The i-dog was licensed to Tiger Electronics, a subsidiary of Hasbro Inc for distribution in the United States. Today, a complete series of robotic music loving pet’s is available in different colors and looks. i-pet’s can wear clothing and they react to music from an external source, such as an MP3 player. They feature seven flashing LED lights on its face and have the ability to ‘dance’ to the beat of the music. They also have a number of switches to react to user input. They have various emotions (which change based on user interaction) that provide different color patterns on its LED lights.

I-CAT, the musical feline is fond of rock, punk, rap, hip-hop, dance, techno and more! I-DOG entertains you with electronic lights, movements and sounds based on the music you play.  I-CY, the performing penguin, loves to dive into music and flap its flippers to your tunes. You make him happy with lots of music and interaction! I-CY communicates moods through musical riffs, movement and tons of blinking light patterns! It even squawks to let you know when it needs more attention! I-FISH dances by swishing it’s tail and spinning around.

To switch the I-DOG off, press the nose button more than 5 seconds. 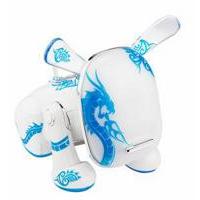 In 2007, a basic version of the i-dog was manufactured for the McDonald’s corporation, with reduced functionality, different styling and without speaker or movement. The toy has a switch on its underside that turns it on, subsequent pressing of the nose button causes the lights in the head to flash varying colours. 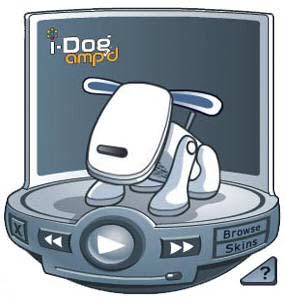 The latest creation, I-DOG AMP (Automated Music Personality), is aivalable in four colors.  Plug it into your music player and get stereo sound – louder than before – when he plays your music through his built-in speaker! Control the volume with his tail and rock out! And with cooler moves than ever before, this doggone-good dancer taps his paw to the beat, bobs his head, wags his tail and gets his ears movin’ and groovin’!

A virtual I-DOG (digital representation of the new I-DOG AMP’D) can be downloaded from the Tiger Electronics website for MAC’s and PC’s. Virtual I-DOG dances in synch to the MP3 music files stored on your computer. Browse for a song using Virtual I-DOG’s interface and play a tune to watch him groove.