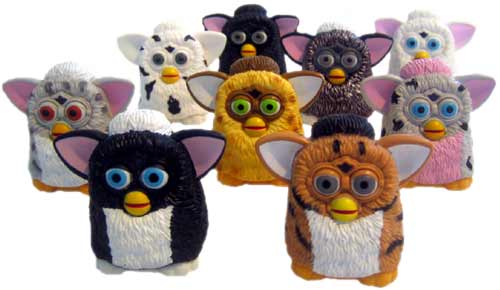 A Furby is an electronic toy made by Tiger Electronics (subsidiary of Hasbro Inc.) which was first shown at the International Toy Fair in 1998. Created by Dave Hampton and Caleb Chung, the classical furby, which is 15 cm tall, originally retailed for about 35 $US. They were hard to find at the beginning and the growing demand for these toys drove the resale price as high as several hundred dollars in newspapers and in auctions. Nicknames were given to them, and sellers assigned rarity values to them. Furbies 1998 mainly had only 1 personality which is a calm and friendly furby. 24 Special Editions were produced, which range from all different genres of events.

Furbies 1998 can communicate with one another via a heart-shaped infrared port. Furbies start out speaking entirely Furbish, a language with short words, simple syllables, and various other sounds, but are programmed to speak less and less Furbish and more and more English as they “grow”. Simple electric motors and a system of gears close the Furby’s eyes and mouth, raise its ears, and lift it off the ground. The originals are still popular with many hackers as they can be dissected and made to do interesting things (see furby autopsy). In particular, their advanced audio capabilities and various sensory interfaces make them popular with the circuit bending community.

In 1999, the Furby Babies were introduced, which are smaller than the original, have higher voices, and cannot dance. In the following years, novel furbys and furby friends were released, like Gizmo, Yoda, E.T. and Shelby. The third species of Furby, Emoto-Tronic, was released in August 2005. Larger than the previous version, the new Furbies have been upgraded with a more emotional face and a voice recognition system, enabling them to communicate with humans. One year later, emo-tronic furby babies and funky furbies have been introduced.

Furby 2012, also known as Furby 3.0, was the long awaited revival of the Furby series by Tiger. This serie was followed by Furby Party Rockers in February 2013 and by Furby BOOM in August 2013.

In 1999, McDonalds teamed up with Tiger Electronics to create McFurbys, their latest Happy Meal toy. These were small plastic Furbies in a variety of colours. Some featured limited sound effects and/or movement capabilities. There were a total of 80 to collect.

“Every furby deserves a home” is the motto of the Furby Adoption Center. Fun, chat, infos, artworks, photos, stories and overview of the furby generations are the content of this website.