A team of researchers at the Stanford University, lead by Mark Schnitzer, an associate professor of biology and applied physics, planted tiny probes inside mice brains to detect what were essentially mouse memories. The study was published February 10, 2013, in the online edition of Nature Neuroscience. 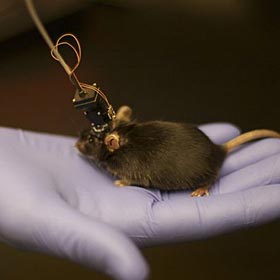 The experiment involved the insertion of a needlelike microscope into the hippocampus of the mice brains. The microscope detected cellular activity and broadcast digital images through a cell phone camera sensor that fit like a hat over the heads of the critters as they were running around. Over the course of a month, the scientists were able to document patterns of activity in about 1000 neurons of the mice brains where they store long-term information. To get the results, an engineered gene was injected into the mice brains so that their proteins were sensitive to calcium ions. That caused the magnified cells to light up on the computer screen in flashes of green fluorescence when the neurons were activated.

Three students, who worked on the project, have formed a startup company called Inscopix, and they plan to sell the technology to neuroscience researchers.

More informations are available at the news website of Stanford University.