“The hope is that, in not too many years, human brains and computing machines will be coupled together very tightly, and that the resulting partnership will think as no human brain has ever thought and process data in a way not approached by the information-handling machines we know today.”

The Internet has two birthdays.

The first birthday of Internet was 45 years ago (October 29, 1969) when Leonard Kleinrock supervised graduate students, among them Vinton Cerf, who transferred the first message on ARPANET from the University of California, Los Angeles (UCLA) to the Stanford Research Institute. Leonard Kleinrock published in 1961 his first paper entitled Information Flow in Large Communication Nets. This paper is often credited as the initial idea leading to the Internet.

The second birthday of Internet was 24 years ago (25 December 1990) when Tim Berner-Lee implemented the first successful communication between a Hypertext Transfer Protocol (HTTP) client and server via the Internet. This was the start of the world wide web (www).

Personally I consider that the real birthday of the Internet was in 1960 when J.C.R. Licklider, researcher and professor at the Massachusetts Institute of Technology (MIT), published his paper Man-Computer Symbiosis. In 1962, J.C.R. Licklider was appointed head of the Information Processing Techniques Office (IPTO) at the United States Department of Defense Advanced Research Projects Agency (ARPA). In 1968, J.C.R. Licklider published together with Robert W. Taylor, an experimental psychologist and mathematician, the visionary paper The Computer as a Communication Device.

The following cartoons, drawn by Rowland B. Wilson to accompany J.C.R Licklider’s and Robert W. Taylor’s article, reflect the essence of their visions. 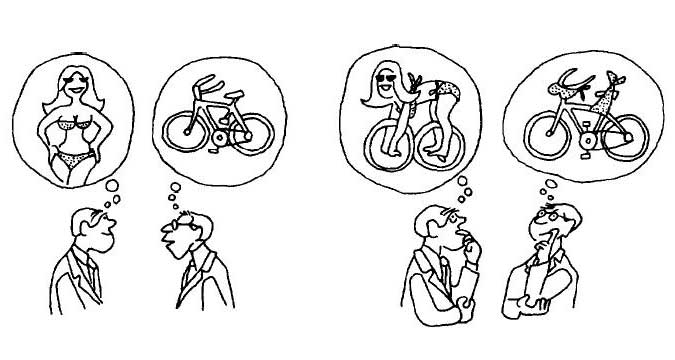 When mental models are dissimilar, the achievement of communication might be signaled by changes in the structure of one of the models, or both of them. 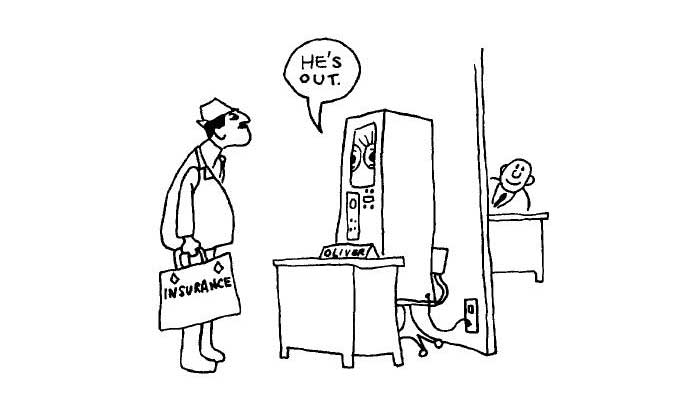 Your computer will know who is prestigious in your eyes and buffer you from a demanding world.

The outstanding paper The Computer as a Communication Device read like old science fiction in which man and machine are one. J.C.R. Licklider predicted a day when man and machine have integrated their positive characteristics in such a way that interactions would be completely complementary. The following topics are explored in the paper :

J.C.R. Licklider left ARPA before he was able to implement his visions, but his ideas had a profound effect on the future development of the Internet. One of his visions about computer networks however did not became true :

“Unemployment would disappear from the face of the earth forever, for consider the magnitude of the task of adapting the network’s software to all the new generations of computer, coming closer and closer upon the heels of their predecessors until the entire population of the world is caught up in an infinite crescendo of on-line interactive debugging.”

Today, the Internet has a rich history with thousands of persons who have made a significant contribution to what the Internet is and what it will become in the future. While a few merit the title of “Father of the Internet”, like J.C.R Licklider, Robert W. Taylor, Leonard Kleinrock, Vinton Cerf and Tim Berner-Lee, there is also a large family of aunts and uncles.

To understand the whole history of Internet and it’s family, it’s worthwile to have first a look at some statistics. 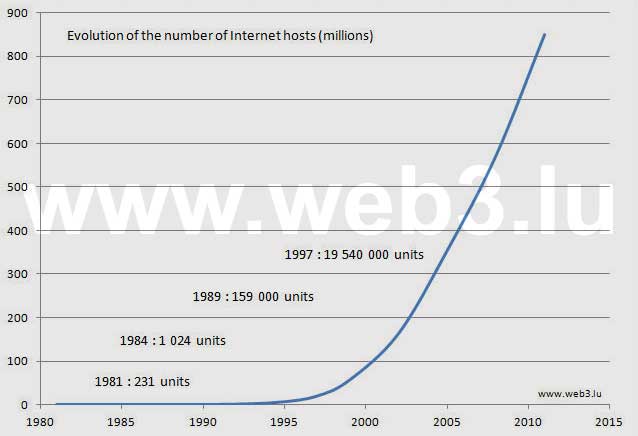 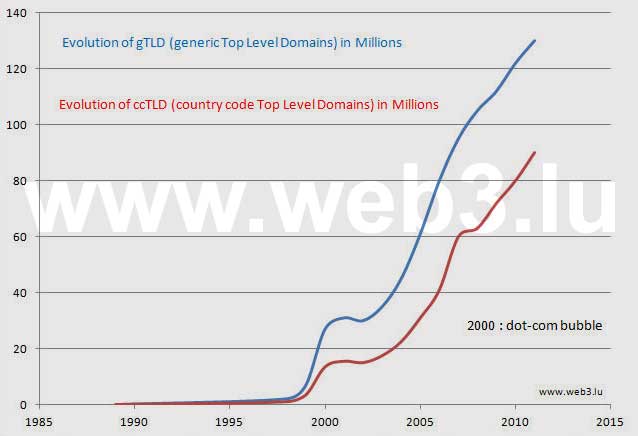 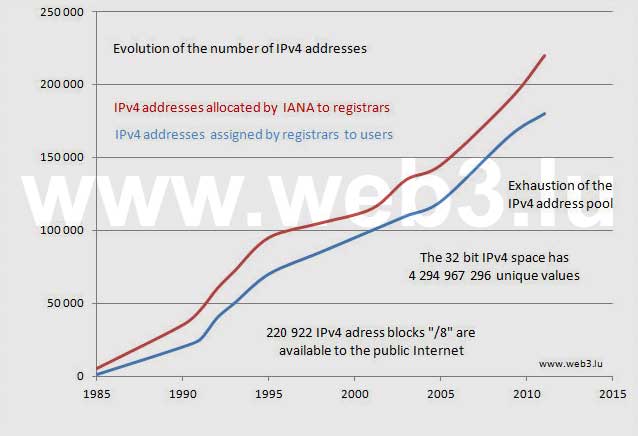 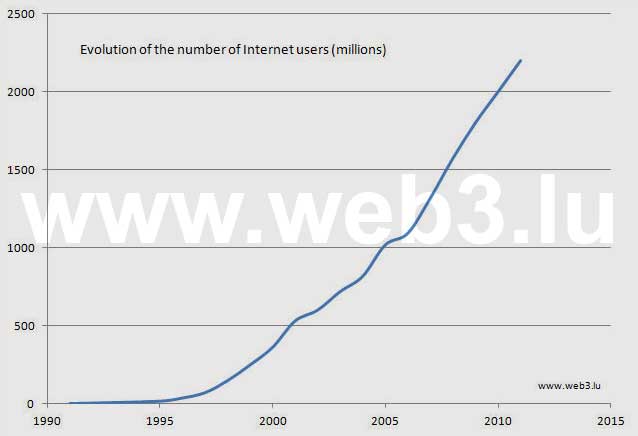 The number of Internet users worldwide exceeded 2 billion people in 2010. 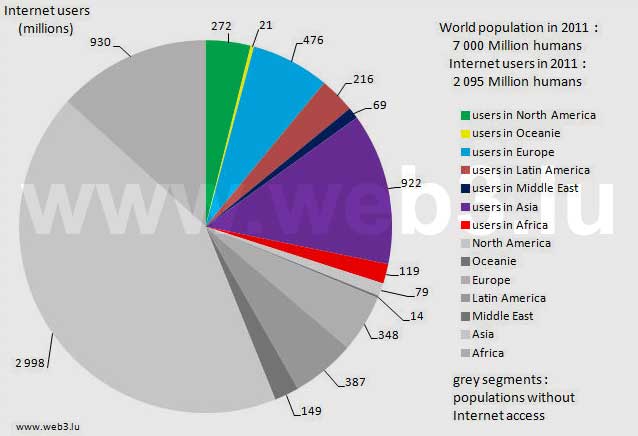 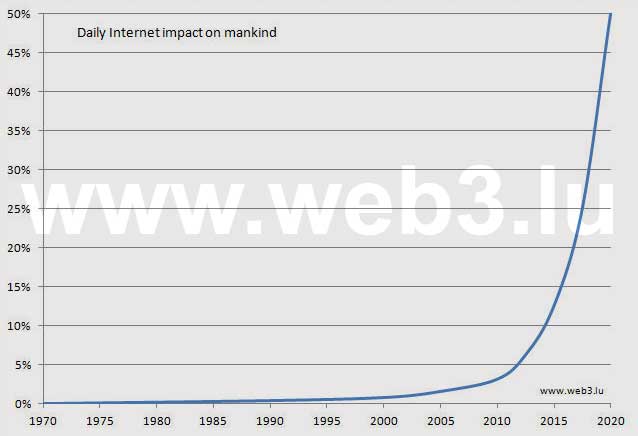 The Internet will continue to grow exponentially in the coming years. I forecast that in 2020 the impact of the Internet on mankind will exceed 50%. This means that in North America, Oceanie and Europe allmost all people are dependent from the Internet to live their personal life. In Latin America, Middle East and Asia most people will have access to Internet and benefit from its advantages in 2020. In Africa the penetration of Internet users raised from 0,5% in 2000 to 11% in 2011, but the african continent risks to stay behind the other continents if no significant changes are operated in the near future to reduce the digital gap.

A next step to better explain the evolution of the Internet consists in dividing the history timeline in three segments :

I will give a brief overview about he Internet prehistory and the Internet network history, but I will mainly focus on the Internet world wide web history and on its future evolution. I did a further segmentation of this period to show the continous changes in Internet technologies, concepts and usages and to present selected Internet pioneers and corporations which I consider as main contributors to this challenging project.

The following pages provide more global insights in the evolution of the Internet :